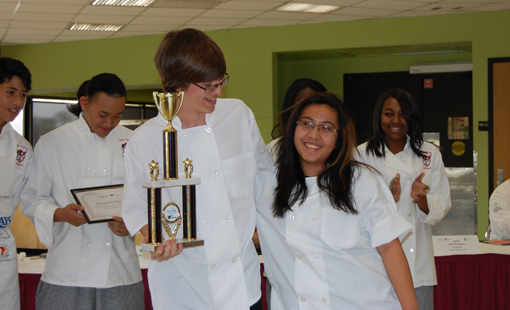 We’re thrilled to announce that two culinary students from Sandalwood High School won the Jacksonville leg of the Cooking up Change competition!

Brandon Antonelli first developed his passion for cooking watching culinary shows on television, particularly those of British chef Gordon Ramsay. “When I tried out freshman year for the culinary program, it felt like home, and I’ve loved it ever since,” he says. His partner, Bria Pascua, found her love for the culinary arts picking up over the years, and this year, their teacher at Sandalwood’s culinary program encouraged them both to try out for Cooking up Change.

Once the student chefs had teamed up, they were faced with the task of coming up with an innovative menu that met the strict guidelines of the competition while still finding something they and their peers would eat. They chose a dish they said was “trending”: fish tacos. “We were looking through magazines (for ideas) and my teacher was telling me that no one had really used catfish yet,” Pascua says. “It’s also a trending dish for teenagers nowadays, so we thought it would go with the menu.” Adds her partner, succinctly and eloquently, “Everybody likes tacos.”

Once they had chosen the menu, the duo worked together to conquer the challenges of execution, including presentation and temperature. Antonelli says they had to adapt to cooking everything at different times, which resolved the issue, and is an important lesson for budding chefs of all ages. “We didn’t want to hand the judges cold food,” Pascua says.

In the end, their innovation and careful preparation paid off, as Antonelli and Pascua’s catfish tacos brought home the victory, treating the crowd at Frank H. Peterson Academies of Technology to quite a meal. Antonelli says his favorite part of the competition was seeing the expressions on the judges’ faces as they ate their food.

Student chefs from five other teams from three Duval County public schools participated in the city’s Cooking up Change competition, and all of them did a fantastic job. The teams looked all around the world for inspiration, from Morocco to Greece to their own backyards, to come up with some wonderfully innovative menus. Three cheers for the following students for representing their schools and their city with some delicious-sounding dishes:

The team from Sandalwood will join winning teams from Chicago; Los Angeles; Orange County, Calif.; Denver; St. Louis; Winston-Salem, N.C.; Memphis, Tenn. and Washington D.C. in the national Cooking up Change competition at the U.S. Department of Education on June 10th. In addition to the trip to D.C., the students each get a T-fal cookware set and the team will see their meal served across their school district.

Both team members are excited for the next phase of the challenge at nationals, and will be hoping to take home Jacksonville’s second national Cooking up Change title in three years. The 2011 winning team, now seniors in high school, have continued to make an impact in the national conversation about school food, recently serving as judges for the Partnership for A Healthier America’s Great American School Lunch Challenge, where they evaluated school lunches from all-star chefs Anne Burrell and Jose Garces. The 2013 winners, too, are very enthusiastic about weighing in on this issue. “[Cooking up Change] shows that healthy food in schools as possible,” Pascua says.

Congratulations, Bria and Brandon! Can’t wait to see you again in D.C.!

Previous
Friends in Education, Partners in Building Capacity
Next
Fit to Learn Spotlight – How Schools and Chickens Teach Wellness