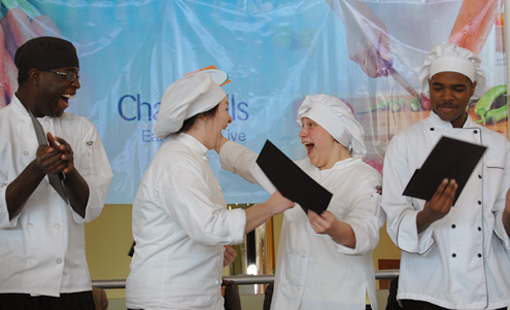 Congratulations to the winners and all the talented student chefs who participated in Cooking up Change Winston-Salem!

Anna Simeonides has always loved to cook, but in her family, cooking healthy is also a necessity. Simeonides says she really got into cooking when her brother was diagnosed with a number of health issues and food allergies. She began working with special flours and vegan cooking. “I am all about eating healthy,” she says. “You feel so much better. I think kids need to realize what a difference that makes in your life.”

Simeonides and her teammate, Sophie Randleman, were among culinary students from throughout Winston-Salem and Forsyth County schools who sliced, diced and delicately arranged enticing dishes as part of the city’s Cooking up Change competition, which featured six teams of student chefs. Randleman and Simeonides, who call themselves “The Kitchenettes,” won the Winston-Salem leg of the competition with their delicious meal of Tenacious Turkey Chili with Sunshine Fries and Apple Crunch Bowls.

“We wanted to come up with something unique and healthy instead of just putting a salad on the plate and saying, ‘Here, eat this.’” Randleman says.

So they brainstormed. Chili came to mind immediately, and sweet potatoes, sweet and satisfying but with many nutritional qualities, followed soon. “We really wanted to go with a hearty meal — comfort food with a healthy twist,” Simeonides says. “Things that were filling, but things that would taste good.”

The Kitchenettes faced a few challenges on their culinary journey, notably being shorthanded a teammate, as the third member of the group was unable to compete. But, they were able to readjust their recipe and procedures, create a new process and get everything into the oven on time. “We had to get it done in the same amount of time with fewer hands,” Randleman explains. “We divided the work up and tried to do it in the most efficient way.”

And, they learned a thing or two about cooking for schools. “I definitely learned how hard it is to create a yummy lunch that meets all these requirements,” Simeonides says. “You think, ‘Why don’t they make this?’ But to combine all these components, it’s not as easy as it seems.”

The students who participated in the Winston-Salem competition, even though they all came from different high schools, all have common ground in the Career Center. The sense of camaraderie was clear with this group. Randleman says she enjoyed working with her partner and learning from everyone else who had made it this far in the competition. “Everyone we worked with in the kitchen, everyone was so focused, we all knew that we were there to pull a learning experience,” Simeonides says. “I made some great new friends in the process.”

Student chefs from five other teams from across the district, but all participating in the Career Center’s culinary program, participated in the city’s Cooking up Change competition, and all of them did a fantastic job. The teams responded to the challenge with imagination, which shows in the delightful names of some of their creations. Three cheers for the following students who  represented their schools and their city with delicious-sounding dishes:

The team from Winston-Salem will join winning teams from Chicago, Los Angeles, Orange County (CA), Denver, St. Louis, Jacksonville, Memphis and Washington D.C. in the national Cooking up Change competition at the U.S. Department of Education on June 10th. In addition to the trip to D.C., the students each get a T-fal cookware set, and the team will see its meal served across its school district.

And the Kitchenettes have high hopes for their trip to nationals. Both chefs are excited about the opportunity to continue to hone their skills. “I just want to go in there with a bang and learn something from it,” Simeonides says. “I want to keep practicing my culinary skills. It’s a great way to get out and learn about public speaking and working under pressure, so crucial to doing this as a career.”

Congratulations, Anna and Sophie! Can’t wait to see you again in D.C.

Previous
Friday Recipe: Create Beautiful Easter Eggs With Natural Dyes and Ingredients
Next
Competitive Foods in Schools: A Perspective from the Vending World