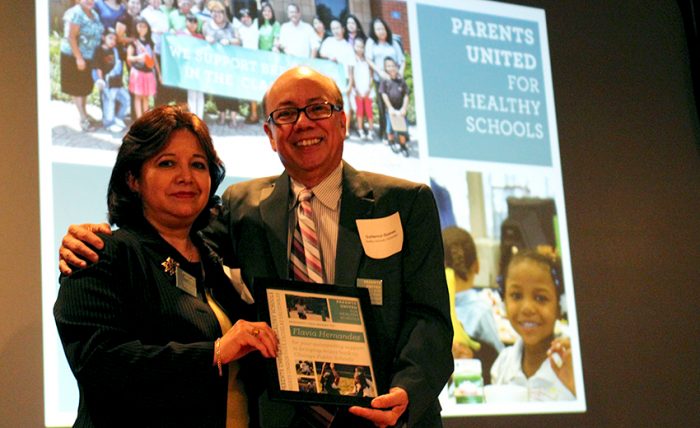 Flavia Hernandez, principal at McCormick Elementary School, has been an advocate for student health and wellness her entire career, which includes time as a Chicago Public Schools (CPS) official and principal. She’s retiring at the end of this school year, and we wanted to thank her for her years of hard work to make schools healthier places for students.

Her passion for health and wellness comes from her own experiences growing up in Chicago. Hernandez lived with her family in an apartment, and she never played outside because it wasn’t safe. The schools she attended also didn’t have space for physical activity, so they had to walk several blocks to a park. She remembers how excited she was when her parents bought their first house and she had a backyard to play in. “As a principal and district leader, I have always tried to support our students, teachers, parents or schools in obtaining what I might not have been so lucky to have growing up,” she says.

At our 2013 Principals’ Breakfast, Hernandez received the Recess Hero Award for her instrumental role in bringing recess back to CPS elementary schools. As a school district official, Hernandez was a champion for recess and was instrumental in bringing recess back to CPS after a long absence. She helped form a taskforce that led to the creation of the CPS Recess Plan, which was written in part by parents and created with the input of teachers and principals throughout the district. Advocacy efforts from Parents United for Healthy Schools were instrumental in establishing the taskforce and returning recess to schools. In 2009, Parents United submitted more than 4,000 petitions to CPS in support of recess and called for the creation of that taskforce.

Hernandez also served on the Illinois Taskforce for Recess, which was charged with examining the barriers facing schools in providing daily recess and making recommendations for overcoming those obstacles. This work led to the creation of the first guide for CPS principals on implementing recess during the school day.

Hernandez has seen the positive impact the return of recess had on her students. “As a principal, I have seen students release the energy they build up being indoors or sitting for a large part of the day,” she says. “They are more relaxed, calm, focused and even re-energized after spending time outdoors.”

In 2014, when CPS passed a new PE Policy that makes physical education a core subject and requires students to receive high-quality PE every day, Hernandez signed up her school to participate in a pilot aimed at rebuilding a school’s capacity to deliver high-quality daily PE to all students.

That pilot program, called 30-20-10, focused on 30 minutes of daily physical education, 20 minutes of daily PE and 10 minutes of movement in the classroom. It focused on elementary schools, starting with first through third grades. Hernandez also set the tone to integrate movement into the school day by offering teacher professional development around 10-minute activities that are integrated into the classroom. This is a core element of our Fit to Learn professional development program. Hernandez has served on the Principal Advisory Committee of that program.

Hernandez has seen the focus on health and wellness grow in her school. “Each year I see more and more teachers attend workshops outside of the required professional development on health and wellness,” she says. “We now have teachers in all grade levels providing students ‘brain breaks’ during the school day! In addition, the LSC now has a standing Wellness Committee report at every meeting and have added brain breaks at meetings for staff.”

Much of that increased focus is thanks to Hernandez’s leadership. She credits her teachers, staff and parents with their open mindedness and teamwork when it comes to creating schoolwide change. She will be missed when she retires this month, but her accomplishments will continue to move CPS forward in the work of student health and wellness. Best of luck in your next endeavors, Principal Hernandez!

Previous
Congrats to Lake Washington School District!
Next
How Tennessee is Addressing Chronic Absenteeism in its ESSA Plan