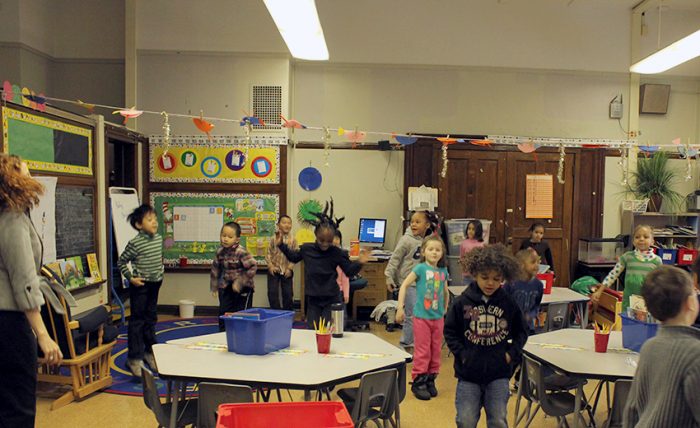 This summer, Healthy Schools Campaign had the opportunity to talk to 75 teachers, principals, school psychologists and other school staff across Illinois to ask them for their input on the implementation of the Every Student Succeeds Act (ESSA) in Illinois at the Partnership for Resilience and the Illinois Education Association’s (IEA) June conference, “Resilience Beats ACEs: Building Trauma-Sensitive Schools.”

HSC has been working to educate school stakeholders about ESSA’s potential to support healthy schools, thereby better supporting successful students. A key focus of ESSA is supporting the whole child, and HSC is working hard to ensure that as each state implements the new law, they recognize the need to prioritize the health and well being of students, including behavioral health.

HSC was invited to delve into the big picture of education policy, presenting on how ESSA can shape a school’s ability to direct resources to address the behavioral health of their students, and how conference attendees could engage with the Illinois State Board of Education (ISBE) as it creates Illinois’s plan for putting ESSA into action.

Our discussion focused on school accountability systems and how they may change under ESSA. This new law requires all states to rewrite school accountability systems: the ranking system that has previously determined whether schools were “low performing,” and thus require an intervention to improve school performance. While these rankings were based almost solely on test scores under No Child Left Behind, these new, state-determined accountability systems must also include at least one “measure of school quality or success” that facilitates student growth and improvement. These measures of school quality or success, known as “non-academic indicators” complement test scores. Some examples of commonly discussed non-academic indicators include student engagement, measures of school climate and career readiness.

This was an important opportunity for HSC to ask educators: what do YOU want to see in the Illinois accountability system?

So we divided our 75 educators into small focus groups and asked them to use their experiences to answer the following questions: to what non-academic indicators should schools be held accountable? What factors are critical to student success? What factors would be a good measure of behavioral health?

Great teachers think alike: Every single focus group wanted at least one indicator that measured family or parental involvement. For some educators, the desire for these indicators was aimed at assessing the relationship and communication between students’ families and the school, while other educators were most focused on measuring parent attendance at school events.

The other most popular indicators were measures of attendance and student discipline. Notably, the discussions around attendance focused on the absenteeism of individual students—absenteeism rates that are not accounted for in the metric of average daily attendance—and potential strategies to reduce absenteeism. Our discussion focused on addressing both excused and unexcused absences per the definition of chronic absenteeism. The conversation around student discipline focused almost exclusively on reducing suspensions and expulsions as a means of disciplining students. This conversation around suspensions and expulsions revolved around the idea of these tactics as punitive discipline measures that can sour a student’s relationship with a school as well as increase student absenteeism, damaging their potential ability to learn. Other commonly suggested indicators included health measures such as the availability of health services, trauma-appropriate professional development and measures of school climate.

Illinois’s accountability system is a powerful tool that could significantly change the state’s education system for the better. Because it structures the way in which schools are ranked, these non-academic indicators drive where schools put their funding.

As ISBE drafts a new accountability system for Illinois, they are considering the input of school stakeholders, and teacher input like this is crucial in a system that prioritizes the whole child with a well-rounded, equitable education.