The Aha Moment: Why John Abels Loves Cooking up Change 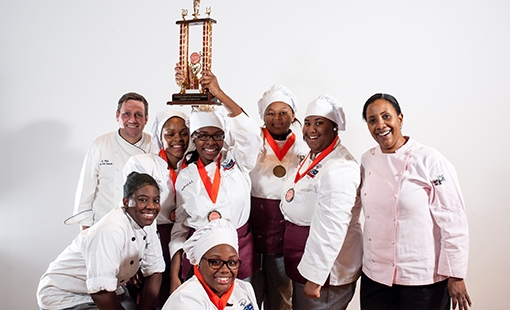 For Cooking up Change mentor John Abels, the ‎Lead Chef Instructor and Manager of Campus Events at Le Cordon Bleu College of Culinary Arts, the best part of his mentoring experience is when a team has an aha moment. “When they get those moments of complete understanding of what they’re doing and that it’s not that far out of their reach,” he says. “Every mentor wants that.”

Last year, his team at Marshall High School had such a moment when they were struggling because they weren’t allowed to add salt. Then they realized they could add a small amount of soy sauce. “They found a better result without having to use the ingredients that they were used to using in their cooking,” he says.

Such revelations give the culinary students an appreciation of the challenges of the of the school meal program. “Cooking up Change gives students a better understanding of why the nutritional standards were changed instead of having the changes forced on them,” Abels says. “They realize that you have a good tasting meal without a bag of fried food. It’s a tremendously eye-opening experience for these student chefs.”

The Marshall team went on to win Cooking up Change Chicago 2014 with their menu of Haitian Spice Chicken, Slamming Collard Greens and Pineapple Surprise Parfait.

That means Abels enters this year’s competition as defending champ. But, he says, the win belongs to the team. “It was all on those amazing young ladies,” he says. “I just helped them refine the recipe a bit.”

This year’s team from Marshall will push the envelope and experiment with ethnic cuisine, too, Abels says.

Abels says every mentoring experience teaches him that the future of his industry is very bright. “I love being able to share my knowledge with the next generation and being able to help Cooking up Change affect change and expose kids to more nutrition options,” he says.

If you’re in Chicago, please join us on Oct. 29 to listen to what these talented young chefs have to say about healthy school food and taste their delicious meals. All proceeds from the event go toward our mission to improve school and student health in Chicago and across the country. If you are from outside of Chicago or cannot attend, you can make a donation or enter the grand raffle.

The Chicago competition is just the beginning of an incredible nationwide contest. The winning team from Chicago will join other winning teams from across the country when they compete at the Cooking up Change National Finals in Washington, D.C., next June. We’ll announce the full Cooking up Change 2015-2016 schedule soon!

Previous
A School Food Revolution in Detroit
Next
Growing up with Cooking up Change: an Interview with David Blackmon