The Cooking up Change Chicago Team Makes their Voices Heard in D.C. 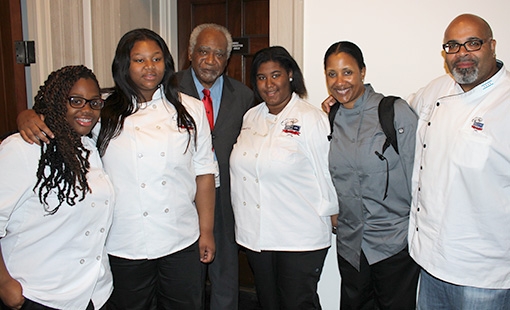 The Cooking up Change competition challenges student chefs to create healthy meals their peers enjoy, and to do so while adhering to the nutritional guidelines, budgets and ingredient lists of the National School Lunch Program. This year, Healthy Schools Campaign held local contests in nine cities across the country, and the winners of those contests traveled to Washington, D.C., to compete in the finals.

But Cooking up Change is about much more than crowning a national champion; it’s about elevating student voices in the national conversation about school food. And the Chicago team had several opportunities to talk about their Cooking up Change experience and to express their support for healthy school meals. In addition to the cooking competition, these student chefs took their message to a Capitol Hill briefing on school food, a Senate tasting event and individual meetings with their Congressional representatives to speak about the importance of healthy school food.

On Tuesday, the students participated in a Q&A session with House staffers. Da’ovan talked about how the inspiration for the team’s chicken entree came from her desire to experience some of her Haitian culture in Chicago Public Schools, and Zykeria talked about how eating healthier meals has helped improve her focus in school — and, ultimately, her grades.

On Wednesday, U.S. Representative Danny Davis and his staff met with the students to congratulate them and to learn about their Cooking up Change experience. Also, on Wednesday, the team participated in a Senate tasting event where Senators and Senate staffers tried the food and chatted with students. Senator Dick Durbin attended the event, as did a staff member of U.S. Representatives Mark Kirk’s office.

The trip to the Cooking up Change National Finals offered the student chefs another opportunity to spread their message about healthy school meals. In May, the Chicago team was able to present to the Illinois State Board of Education about their meal and their experience learning about healthy cooking. These student chefs show us all that within the constraints that schools face every day, it is possible to create healthy meals that appeal to students using whole grains, low-sodium and plentiful fruits and vegetables. It’s a “can do” message, and one that is needed in the current debate about school meal nutrition standards.