The School Kitchen of the Future Is Already Late 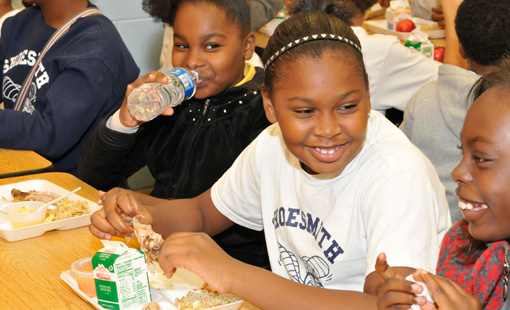 Time to invest in school food

Right now, there’s a lot of talk about school food and the challenges of creating healthy, delicious meals. Congress is considering rolling back some of higher nutrition standards that went into effect two years ago. Why? One major argument: If kids won’t eat the healthier meals, schools lose money.

School kitchens, for example, are in dire need of extra funds. Kitchen facilities should support the cooking of healthy and less-processed meals. But in Chicago and in cities across the nation, facilities are old and often lack the needed equipment to meet new, healthier USDA requirements for the National School Lunch Program.

A recent report by The Kids’ Safe & Healthful Foods Project illustrates the real depth of schools’ facilities needs. From the report’s key findings:

In a 2013 report, HSC identified the top 10 pathways to improving school food in Chicago Public Schools , the nation’s third-largest school district. Among our chief concerns was kitchen facilities and infrastructure. So we recently spoke with Jessica Donze Black of The Kids’ Safe & Healthful Foods Project about this topic. A few things we learned:

The need is great. The Kids’ Safe & Healthful Foods Project study was inspired by signs of an overwhelming need to improve kitchen equipment and facilities. When Congress made $100 million available under the American Recovery and Reinvestment Act, $630 million was requested.

Time, money, and kid appeal are on the line. Multiple produce deliveries are needed for schools that lack storage space, and without proper equipment, the all-important taste may be sacrificed. Black illustrates with an anecdote: “I may want to serve pears, but kids aren’t taking the whole fruit, and I might not have an automated sectionizer. If I did, then I might serve sliced pears, and kids might be more willing to take and eat those.” Another example: A “combi oven” has the ability to bake chicken yet give it the crispy taste of the more-familiar fried chicken.

The return on investment can’t be readily quantified, but it could be profound. Black says: “Programs that have more up-to-date and adequate infrastructure are more likely to make meals that are healthier and tastier, getting more kids to participate, which brings more money into the program. It’s cyclical and self perpetuating.”

It’s not all or nothing. Black noted that incremental change can make a big difference. While many schools need to make major capital improvements, the top five needed pieces of equipment nationally are all under $2000. A small grant to a school can make a significant improvement on their program.

Black also said that some districts do have budgets for these expenses. Just because a school didn’t have a piece of equipment yet, it doesn’t mean it’s not on the district’s short-term shopping list. But in far too many schools, their needs remain out of reach.

Right now, without the proper equipment and infrastructure, we’re asking too many schools to run meal programs inefficiently and with inadequate equipment. We’re pleased to see the additional $25 million in the federal budget, but the recent Kids’ Safe & Healthful Foods Project report [pdf] points to a much broader need. Kids themselves are even speaking up to share their experiences in this area, through HSC’s Cooking up Change healthy cooking competition. Cooking up Change student chefs compete to create a delicious, healthy school meal under the same constraints faced by school kitchens, and based on their experiences, last year they urged lawmakers to spend more on school kitchens. They plan to do the same this year at a congressional briefing.

So let’s take good nutrition off the chopping block and invest in it instead. School kitchens and infrastructure are just one of the many investments that would directly support schools in meeting high nutrition standards. With one in three American children considered overweight or obese, we can’t afford the alternative.

Previous
Guest Blog: Lessons for A Healthier Happy Birthday
Next
With the Institute of Medicine, Connecting Education and Health