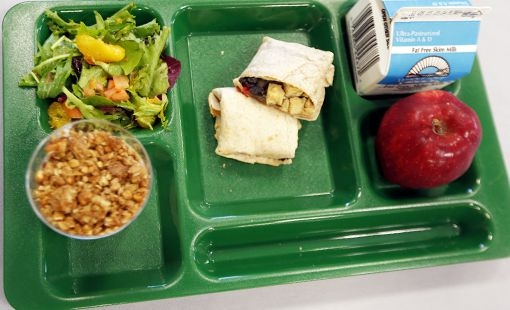 “Our survey found that people in the U.S. overwhelmingly support strong nutrition standards and believe school meals are healthier and on the right track because of these standards,” said La June Montgomery Tabron, president and CEO of the W.K. Kellogg Foundation. You can find out more about the poll and download a toolkit and resources here.

In 2010, Congress passed the Healthy, Hunger-Free Kids Act (HHFKA), raising the standards for school food for the more than 31 million students who eat meals at school each and every day. The new standards include providing fruits and vegetables and whole grain-rich foods to students as part of the meal program.

The standards have drastically improved the perceived quality of the food in school cafeterias, the poll found. In 2010, only 26 percent of Americans said school meals were excellent or good. In 2015, that figure jumped 41 percentage points to 67 percent. And 57 percent of those polled said the food in cafeterias had improved while just 9 percent said it declined since the new standards were implemented.

Despite the great progress, one in three American children is still overweight or obese, and 89 percent of Americans say that childhood obesity is a problem or an epidemic. It’s precisely for this reason why we can’t abandon the great progress that’s been made on school food.

Healthy Schools Campaign stands with the majority of Americans, and we’re asking you to stand with us and voice your support for healthy school food. We’ve made it easy for you to send a letter to your Congressional representatives by simply entering your ZIP code via the following link. You can use or revise the templated letter that we’ve created, or write your own. Start your letter here.