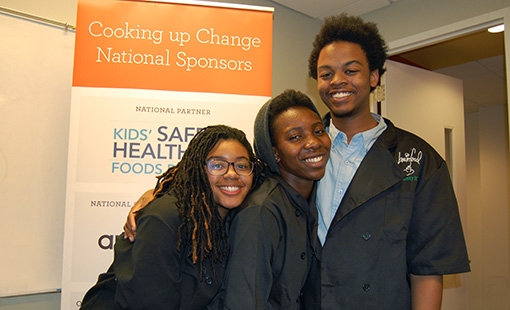 When Dion H., Ay O. and Tatyanna C. first decided to swap out chicken for a veggie patty in their Lo Mein recipe, they were skeptical. The decision was made to keep the dish under budget and within the nutritional guidelines set by the contest. But it turned out to be delicious.

On April 30, that team presented their menu of Yummy Lo Mein with Colorful Salad and Sweet Peach Applesauce to the Cooking up Change judges at the Washington, D.C., competition, and they won.

Through the contest, student chef Dion learned that by striking a balance, anyone can make a school meal that is both nutritious and delicious. “We wanted to make something that fit the mold of the contest but was unique to our own tastes and the tastes we felt other students would have,” he said.

Dion is no stranger to the kitchen. “I’ve always cooked, or helped cook at least,” he said. “I helped around with my mother, my grandmother and my aunts in both casual and semi-formal settings. Whether it be ordinary dinners or family gatherings, I was always there to help out.”

Student chef Ay is no stranger to the kitchen either, but she learned more about what it means to cook healthy. In the past, she thought that healthy cuisine meant using ingredients that were deemed healthy, but through Cooking up Change she learned that healthy cooking means a great number of things. For example, she found out that one ingredient can offset an entire dish and make the fat content too high. “I learned how much it takes to provide a healthy meal for people,” she said. “I thought it was just a bunch of seemingly healthy things thrown together, but it is way more than that.”

For Tatyanna, the competition opened her eyes to just what a healthy meal means for some students. “I have realized that healthy school lunches are important because it can be difficult for many children to obtain food at home,” she said. “It is also difficult for a child to eat nutritious food when they cannot afford it. Lunch may seem like small topic of little importance, but many children across the country depend on school lunch when they are hungry and this competition has shown me why it is such an important meal served in schools.”

Providing that context is an important part of the Cooking up Change program. The contest not only serves as a way for student chefs to create meals that appeal to their peers, but also to show that school meals can be healthy, delicious and meet the nutrition requirements.

The winning D.C team will compete next week against other winning teams from across the country next week at the Cooking up Change National Finals in Washington, D.C.

Congratulations to the winning D.C. team — and all the D.C. student chefs — for proving that school meals can be healthy and delicious!