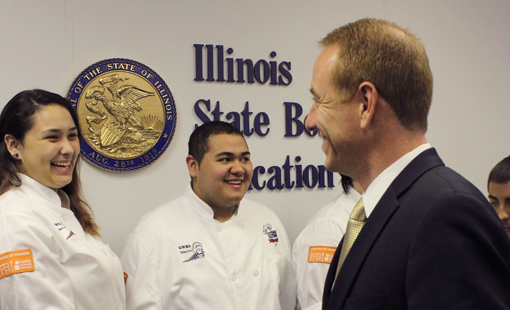 Student chefs from Washington HS, winners of Cooking up Change in Chicago, brought their winning meal to Springfield, Ill. where they shared it with state officials who also learned of their vital message about healthy school food.

Members of the Illinois State Board of Education (ISBE) last Thursday enjoyed a special lunch of chicken rancheros, “elotes Washington” and fruta de trópico — recipes created by our winning Cooking up Change Chicago chefs from George Washington High School. Adding to the excitement of the dining experience was the fact that board members got to speak firsthand with the talented young chefs who created the meal. This month, ISBE recognized the work of Cooking up Change at their meeting, and the five student chefs from Washington High, along with their culinary instructors, had a chance to stand up, be recognized for their work and talk about what the culinary arts and healthy cooking mean to them.

“I like the fact that they asked us personal questions about our story,” student chef Marina Nava said. “We're such a faraway school from the other Chicago Public Schools, so our school doesn’t get recognized very much. But today, I felt important.”

In Springfield, the Chicago chefs began the day with an introduction from State Board of Education Chairman Dr. Gery Chico, who recognized and praised the students, Vanessa Arnold, Leon Sanchez, Leonard Gutierrez, Karen Rivera and Marina Nava for their achievements, as well as their instructors, Laniecia Anderson, Olanike Braimoh and Tai Sellers. Dr. Chico emphasized the achievement of the competition given the strict rules and constraints of the competition. We know from experience, it’s no easy feat.

At the meeting, the students had the opportunity to speak about their culinary ambitions and what the competition means to them. Student chef Leon Sanchez said he hopes to become a chef in the Marine Corps. Leonard Guiterrez wants to open his own restaurant in Beverly Hills. These students take their culinary work seriously and were proud to show it off to state officials.

At lunch, the students discussed the process behind their meal and talked about the elements of their culture and the ideas that went into it. They also talked about the doors the culinary program has opened for them, and how an exercise in healthy cooking has not only inspired them to achieve, but translated into leading healthier lives at home and with their families. One student, Leonard Gutierrez, shared the story of how he made some key changes in his diet, and has not only lost weight, but feels better.

And the crowd loved the meal! When asked about his favorite part, Dr. Chico said he couldn’t pick one element he loved more than the others; he enjoyed them all so much. Board member Melinda LaBarre said she wasn’t expecting the fruit dish to be chilled, but enjoyed the touch. And Vice Chair Steven R. Gilford went back for seconds.

Among the guests who enjoyed the meal was State Senator Andy Manar, who is particularly interested in issues surrounding schools and education. He said:  “I think it’s a good example of what’s going right. Especially with schools, we tend to focus on what isn’t going right, but this is an example of something that is.” Manar added that as a parent, he was excited to see the work schools were doing to make nutrition and fitness a key part of school culture.

After lunch, the team explored some of the important historic and civic sites of Springfield. They visited the Capitol building and sat in the gallery as the House of Representatives began its session, took a look around the Capitol and visited a number of sites relating to Abraham Lincoln, including the historic Lincoln neighborhood and the Lincoln-Herndon Law Office. The students really enjoyed getting to see a piece of state history.

But after taking in the city’s rich past, the team focused on its future. The heart of the trip was still about making their voices heard and sharing their work with decision-makers at the state level, an experience that will prepare them for next month’s Cooking up Change national competition. Student chef Vanessa Arnold said she appreciated the opportunity to have this experience to prepare for the trip to D.C. next month. “Your opinion's always going to matter,” Arnold said. “Someone's always willing to listen if you just take a chance to talk about it.”

Her teammate Marina Nava added that the students really believe in the work that they do and want to continue to talk about it on a national stage. “We want to talk about the good things that we've done,” she said.

Join the team from Washington High School and be part of the conversation about improving school food by spreading the word about Cooking up Change and cheering on your team. Visit cookingupchange.org for information about how to stay connected!