Welcoming a New National Sponsor to Cooking up Change 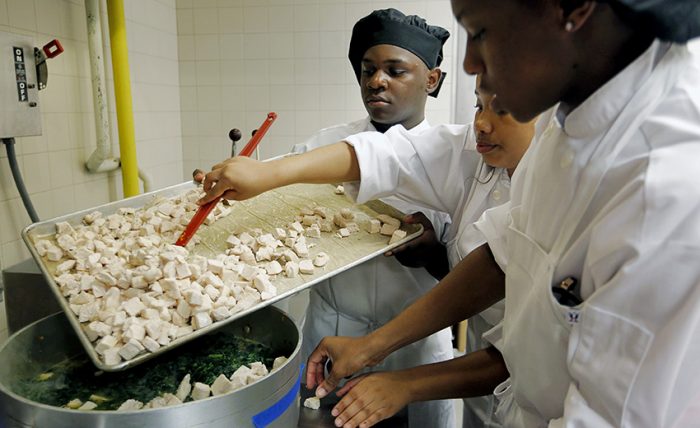 To prepare for the Cooking up Change national finals last year, the team from Detroit traveled to the Innovation Center at National Food Group’s headquarters just outside Detroit. The team prepared their meal in the commercial kitchen and presented the food to a selection of National Food Group staff. “The whole experience was really good and uplifting,” says Kristine Buyers, the creative services team leader. “We were just enthralled with the whole process.”

National Food Group was so impressed with the students and the Cooking up Change program, they decided to sign on as a national sponsor. We’re so glad to have them! National Food Group is a leading food service distributor to K-12 schools across the country, including Detroit Public Schools.

As a food service provider, ensuring that students have healthy food is core to the company’s mission, and National Food Group understands the challenges that come along with making school food healthy, affordable and appealing to students. Its food offerings have to follow the same USDA nutrition requirements that Cooking up Change students do.

National Food Group, too, understands why it’s so important that kids have access to healthy food in schools. “The students are learning how to be healthy when they’re students so they can learn how to eat healthy when they’re adults,” Buyers says. “It also helps them to have a better experience at school if they’re eating healthy and if they have access to the food they need so they can be successful students.”

We’re so excited to welcome National Good Group as a new Gold level sponsor, and we’re excited they can join us at Cooking up Change on Nov. 17. We hope you can join us, too! All proceeds from the event go toward our mission to improve school and student health in Chicago and across the country. If you are from outside of Chicago or cannot attend, you can make a donation or enter the grand prize raffle.