Why CPS is Lucky to Have Pete Leki 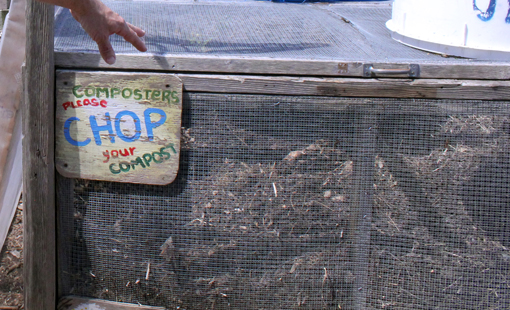 It’s one of the first sunny, warm days of the year in Chicago, and Pete Leki is in his element, raking through the muck. The compost bins at the center of the sprawling school garden are warm and particularly pungent in the heat, but he’s used to it. The ecology teacher at Waters Elementary School in the heart of Chicago’s Lincoln Square neighborhood has led a successful composting initiative not just at Waters, but throughout a growing number of Chicago Public Schools (CPS). So far, CPS has harvested nearly 23 tons of compost, but according to CPS Sustainability Manager Meredith McDermott, that number may be a conservative estimate. She says those numbers come from 18 of the composting schools, but Leki says 35 are either actively composting or in the process of joining a cohort. In this school year alone, 13 schools were added to the composting program.

To understand where the compost initiative comes from, you have to start with Waters Elementary. When Leki arrived twenty years ago, the area around the school was all asphalt except for four bur oak trees, which predate both the school and the city of Chicago. Inspired by the trees, Leki and his team began working with community partners to create a garden of plants native to the area. Once the garden sprang up, so did the weeds, which were put into a compost bin. Endless piles of rotted wood chips formed the base. “We did it very cheaply and very slowly over a long period of time,” Leki says.

Now, the primary source for the three compost bins in the garden at Waters is the cafeteria. When students finish eating, there is a receptacle where they can toss organic waste, such as leftover fruit rinds or peels, which goes into the compost bin. The practice has been integrated into school culture — students, parents, teachers and school administrators all know about the bins and their purpose. “You go in the lunchroom and ask anybody, ‘What are you gonna do with that banana peel?,’” Leki explains. “They’ll tell you it goes in the compost bin.”

But the bins are just more than a method for waste reduction — the compost has also proved to be an effective teaching tool. In his ecology classes, Leki will often have students analyze what’s in the compost, looking for different creatures and natural patterns. The exercises around the compost have taught introductory biology and ecology, and a celebration of biodiversity, starting with the ecosystem in the bin itself.

“It’s very diverse and very amazing,” Leki says. “And it has to deal with temperature, moisture inside the bin and how all that affects what animals will be in there. And also, the taxonomy of those creatures — what a wonderful way to teach taxonomy because we have whole different orders of animals living in there, from worms to slugs to spiders, any amazing numbers of creatures.”

And of course, the compost is used in the school garden, in the cultivation of native prairie grasses and wildflowers, as well as edibles. Per tradition, every fall, the kindergarteners plant potatoes, and later in the year, they eat them together as a class, cooked over the school’s fire pit. The eighth grade students have built a series of raised beds, where students are planting lettuce. The lettuce study is broken into activities — students will pick and harvest the lettuce, wash it, prepare it and eat it. For many students, it’s the first time they have ever eaten lettuce, and certainly the first time they’ve picked it. Leki says their favorite way to eat it is as a “taco,” a little lettuce wrap with some Ranch dressing from a bottle he keeps on hand. Students plant in early spring so they can see what they have grown, or maybe even taste it, before school lets out for summer.

Leki is in charge of teaching other schools how to implement the practices he’s learned hands-on at Waters. He organizes the cohorts, who come to Waters for workshops, both implementation-related and curricular ideas, how the compost can be a part of student learning. He also supports schools in their implementation of it, with the help of bins made and supplied by Prosser High School. Each school also receives a fork, a chopper, a scale and a thermometer to mix and prepare the compost and measure it, as well as Rodale’s book on composting to learn more about the process.

McDermott applauds the schools and staff members who have made the effort to be part of this program. “It’s kind of a difficult thing for schools to start,” McDermott says. “It’s a pretty decent commitment. You really need someone at the school to champion it, to make sure it not only gets done, but gets done correctly.”

And Leki, too, has been amazed by the enthusiasm and vision of teachers and schools who have taken this on. He says this community of composting and gardening schools is growing, and everyone is sharing ideas. This sense of community and stewardship is also seen in the students, whom he says have taken ownership of caring for the garden and the compost bins, often without being asked. Students who help with the garden are rewarded with a luncheon, which features salad made from produce they grew.

As he puts it, “My idea of a good system is when it just goes on and on, even if I’m not there.”