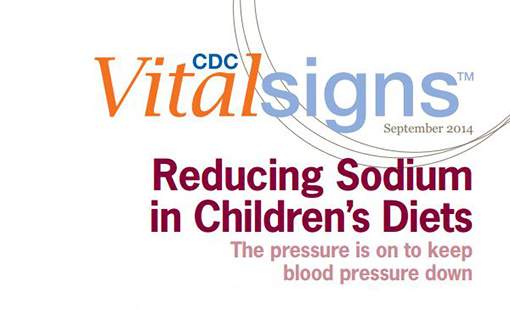 Call it a coincidence, but while recently reviewing a VitalSigns report issued by Center for Disease Control (CDC) about the importance of reducing sodium in children’s diets, news came from Washington that Congress passed a new spending bill that would roll back — among other things — sodium standards for school food.

At Healthy Schools Campaign, we know that healthy students are better learners. That’s why issues like childhood obesity, diabetes and high blood pressure are not just health issues, they’re education issues. Unhealthy students miss more class time, and when in class, research shows that unhealthy students have a harder time focusing and don’t perform as well academically as their healthy peers.

The recently updated national nutrition standards were a big step toward schools recognizing their role in reinforcing healthy eating habits for students, and making the critical connection between healthy nutrition and classroom performance. With many students consuming two meals a day and up to half their daily calories at school, we can’t afford to go back to pizza and french fries being the standard school day fare.

We understand the challenges of creating healthy school food. Our annual Cooking up Change program is based on that very idea — we challenge students to create healthy school meals that their peers enjoy while working within the national nutrition standards. The students tell us each year, “It’s hard!” But, each year, without exception, we see creative, energetic and determined students come up with healthy, on-budget school meals that their friends love. Last year alone, 10 school districts across the country — including some of the biggest like Chicago, Los Angeles, Houston and Memphis — integrated these healthy, student-design meals into their district-wide menus.

Change is hard. Money is tight. Schools need better kitchen facilities. We get it. But those challenges pale in comparison to the challenges our children face when their own schools — not to mention our nation’s leaders — send mixed and unhealthy messages about the types of food that will fuel their lifelong learning and growth.

Going back to that CDC report, it found that 90% of school-aged children (ages 6-18) consume too much sodium each day. It also found that one in six children have elevated blood pressure (a major risk factor for heart disease and stroke), which can be lowered, in part, by consuming less sodium.

The report states that the taste for salt is established at a young age, which is why it specifically points to parents, caregivers and schools as having the greatest potential impact on helping reduce health issues associated with high sodium intake.

The 2012 national nutrition standards already lowered the sodium content in school meals, but even lower levels were to go into effect two years from now, with the goal of eventually reducing sodium in school meals by up to 50% by 2022. However, the spending bill states that the 2017 levels cannot go into effect “until the latest scientific research establishes the reduction is beneficial for children.”

We’re not scientists, but the CDC report (issued September 2014) provides a lot of compelling information that suggests lowering sodium content in school food would be pretty good for kids. We hope Congress is listening.