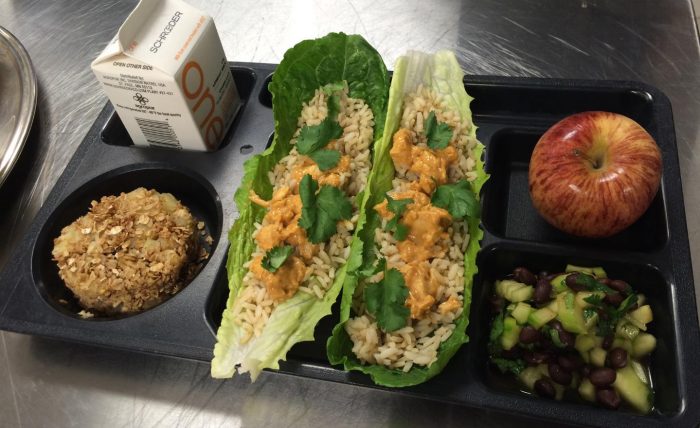 St. Paul Public Schools (SPPS) applied for an equipment grant to bolster its food service operations and ensure the district’s 38,380 students were getting the best food they could.

The district received grants of $50,000 and $4,350 from the Minnesota Department of Agriculture (MDA) and Blue Cross Blue Shield, respectively. But what SPPS is buying with those grants is something usually reserved for high-end restaurant kitchens, not school cafeterias.

The district bought a sous-vide machine for the Nutrition Center, the central production kitchen for all of the district’s school sites. Sous-vide is a method of cooking that involves vacuum packing food and cooking it in a hot water bath.

But why would a school kitchen want to cook using this method? Simple, Stacy Koppen, the district’s nutrition services director, says. Cooking with this method decreases the food shrinkage of protein items from 30 to 45 percent using traditional cooking methods to less than 4 percent using sous-vide. That adds up to less lost product, and a huge savings for the district. Cooking with the sous-vide method can also help retain some of the food’s nutritional value.

Although this high-tech solution to an age-old problem is one of the more innovative things SPPS is doing to meet its students’ nutrition needs, the district was also ahead of the curve on implementing nutrition standards laid out by 2010’s Healthy, Hunger-Free Kids Acts, Koppen says. The district was reducing sodium above and beyond the levels in the nutrition bill, but there were challenges, too.

The district instituted “All You Care to Eat” salad bars that allow students to fill up their lunch trays with fresh greens and as many fruits and vegetables as they want. “We haven’t had a difficult time meeting the fruit and vegetable requirement,” Koppen says. One of the ways the district is able to do this is by limiting the bar to carefully selected items that the district has priced out and balancing expensive items (such as grapes or strawberries) with less expensive items (such as baby carrots).

Another thing St. Paul is doing to ensure its students are getting great-tasting meals that they enjoy is participating in our Cooking up Change contest, which challenges high school students in cities across the nation to create healthy, appealing school meals. The winning local teams will compete against each other in the national finals in Washington, D.C.

St. Paul’s inaugural competition was great, Koppen says. “All our students brought a lot of creativity to the competition,” she says. “It was really exciting to see them get energized about the culinary program.” The winner of the contest was a team from Harding High School, whose menu of Thai Peanut Chicken Lettuce Wraps, Black Bean and Cucumber Salad, and Crispy Pineapple Bake won over the judges. This winning meal will be served across the district.

We’re excited to see all of the teams compete in Washington, D.C., and we’re heartened by the great things that are happening in St. Paul. When much of what we hear about the new nutrition standards is negative, it’s incredibly validating to hear from districts across the country who are meeting—and exceeding—the new standards.

Previous
Georgia Tech Wins Grand GCA With No Help from Chemicals
Next
Cooking up Change at Home: Tropical “C” Burst