Why We’re Thankful for Southwest 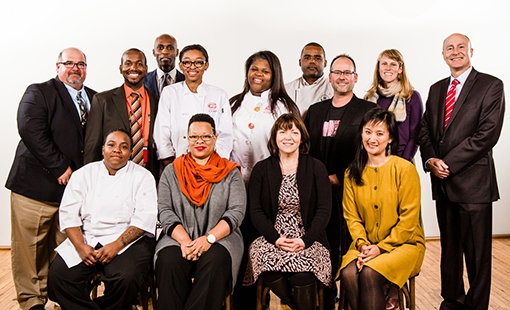 It’s the time of year to give thanks, and here at Healthy Schools Campaign, we’re thankful for our partners that help us move our work forward both in Chicago and nationally. See more posts in this series.

Southwest serves as the Official Travel Partner for our Cooking up Change program, allowing dozens of student chefs to fly to Washington, D.C. every year to compete in our national healthy cooking contest. Southwest, like Healthy Schools Campaign, has a base in Chicago, so much of their charitable work has roots in Chicago.

Patty Greene, the manager of community affairs and grassroots for Southwest, said she was drawn to Healthy Schools Campaign and Cooking up Change because of the impact it has on students’ lives.

At one of the first Cooking up Change Chicago competitions she attended, Patty spoke to a student chef about her experience. “What really resonated with me is that she’d learned so much about healthy cooking and she’s taken that home to teach her mom,” she says.

Patty has attended almost every Cooking up Change Chicago since she got involved, but this year she served as a judge for the first time. “I got to see the challenges that the school cafeterias face as far as what’s available to them and the amount of funding that they have to work with,” Patty says. “It’s amazing that they’re able to turn out a tasty and healthy meal.”

Patty believes what HSC believes: All students deserve a healthy school. Much of that is based in her childhood, when her mother—who was ahead of her time, she says—didn’t allow any processed foods. “What I always see that breaks my heart is seeing kids walking to school with a giant bag of Flamin’ Hot Cheetos and a giant bottle of Arizona Iced Tea,” she says. “That’s just not a good way to start your day. I had such a foundation of healthy food and a healthy life,” she says. “I think every child deserves that.”

We’re so grateful for all that Southwest does for us—and the student chefs of Cooking up Change.

Tags: Southwest, Thankful for Our Partners 2015