A Cooking up Change Alum Returns as a Judge 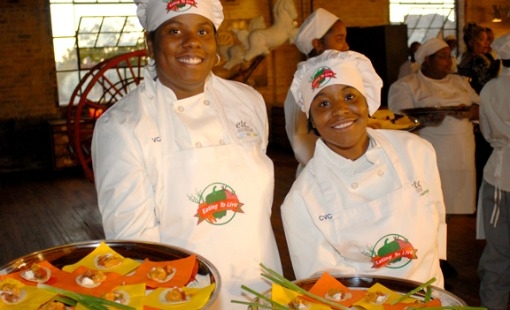 Nearly a decade ago, Nyah Griffin helped lead her team to a first place finish at the first ever Cooking up Change Chicago competition. Her team from the Chicago Vocational Career Academy (CVCA) put together a menu of red beans and rice, smothered cabbage and candied carrots—still the only vegetarian meal to win.

But it’s what she’s been doing since that big win that really highlights the life-changing abilities of the Cooking up Change program. Nyah returned the following year to help mentor the next team from CVCA, started her own catering company and serves as the head chef at Mercy Home for Boys & Girls. And this year, she’s returning to judge the competition.

Nyah applies the lessons she learned in the Cooking up Change competition on a daily basis. “As a student competing in Cooking up Change, you learn a ton of things,” she said. Nyah was just promoted to the head chef of the culinary department at Mercy Home where she oversees a staff of six people and serves about 350 meals a day.

The meals at Mercy Home also follow dietary guidelines set by the state, so Nyah has to keep meticulous records of her menus—something she mastered during her time in Cooking up Change.

Her mentoring experience also comes in handy since the kitchen employs the residents of Mercy Home. In her four years there, she’s worked with more than 300 resident employees. One of her former employees went on to graduate from Washburne Culinary Institute and now works at the popular Lula Cafe in Logan Square—where it’s not uncommon to wait more than a hour for a table.

Nyah also started a catering company right out of high school, inspired by one dish: chicken salad. At this point, she says, she’s made so much of her special recipe chicken salad that she doesn’t even eat it anymore, but people still love it. In 2014, she took a huge leap and incorporated the business. Since then, she’s tripled her revenue—and people love her chicken salad just as much.

On October 29, Nyah will be on the other side of the table asking students questions about their meals and analyzing the taste, originality and presentation. “I’m looking forward to talking to the students about their recipes and their experiences,” Nyah said.

If you’re in Chicago, please join us on Oct. 29 to witness these talented young chefs in action and to taste their delicious meals. All proceeds from the event go toward our mission to improve school and student health in Chicago and across the country. If you are from outside of Chicago or cannot attend, you can make a donation or enter the grand raffle.

The Chicago competition is just the beginning of an incredible nationwide contest. The winning team from Chicago will join other winning teams from across the country when they compete at the Cooking up Change National Finals in Washington, D.C., next June. We’ll announce the full Cooking up Change 2015-2016 schedule soon!