Breakfast is the Most Important Meal of the School Day 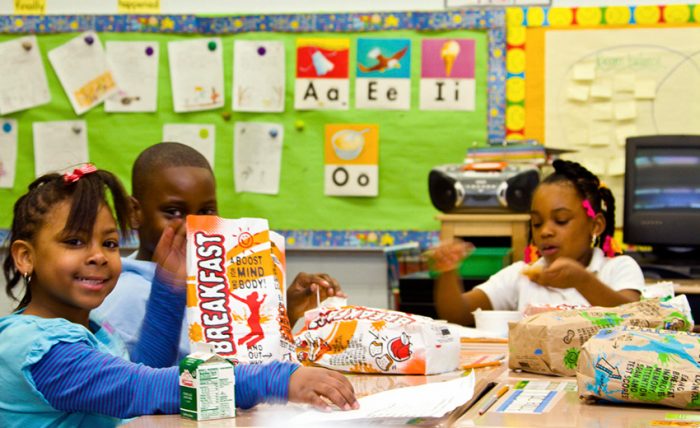 When Luis Soria was growing up, both of his parents worked factory jobs and had to leave in the early morning hours. That left Soria’s older brother in charge. His parents always told the siblings how important breakfast was and to make sure they ate breakfast before leaving for school.

“So what’s the first thing we did when we woke up,” Soria asks. “We watched cartoons.”

Soria remembers waiting until the very last second before rushing to school—without breakfast—and being so hungry by the time the lunch hour arrived that he would “attack” his food. Back in those days, he said, breakfast was not served in schools.

Soria, now the Chief of Schools for Network 8 in Chicago Public Schools, knows how important offering breakfast at school is, especially in Chicago. Given that more than 85 percent of CPS students are low-income and qualify for federally subsidized meals, many of these students rely on schools for most of their meals, including breakfast.

With this week being National School Breakfast week, we thought it was a great time to revisit why breakfast is so important and how CPS is making sure its students get the morning meal they deserve.

That meal is important for so many reasons. Research shows students who don’t eat breakfast have slower memory recall and are more likely to repeat a grade, according to the “School Breakfast: Making it Work in Large School Districts” report from the Food Research and Action Center (FRAC). “Poor access to school breakfast is a social justice issue and an upstream contributor to the widening achievement gap observed in our nation’s school system,” the report says.

Breakfast has a strong link to educational outcomes—even more so than other meals—because of the way the brain responds to food after the short fast during sleep. But for the one in five students in Chicago who can’t count on their next meal, eating a nutritious breakfast at home is rarely a reality. “Healthy, active and well-nourished children are more likely to attend school, be engaged and be ready to learn,” Soria says.

Before becoming a network chief, Soria was the principal at Ellen Mitchell Elementary on Chicago’s west side. In addition to advocating for—and making a reality—daily recess for his students, Soria was also an early advocate for breakfast in the classroom.

CPS uses both breakfast in the classroom—a proven delivery model that serves breakfast during the first 10 minutes of the school day rather than before school—and universal breakfast—which allows all CPS students to receive breakfast for free regardless of family income. Thanks to the efforts of parent leaders in our Parents United for Healthy Schools coalition and other advocates, the breakfast model was codified into policy and now all CPS elementary schools offer universal breakfast in the classroom to all students.

CPS has also been working to make sure the school breakfast is healthy. Starting in the 2010-2011 school year, CPS adopted new nutrition standards that included increased servings of a greater variety of fruits and vegetables, increased amounts of whole grains, standards for breakfast cereal, and the elimination of donuts and pastries at breakfast.

Participation in the breakfast program is still increasing. During the 2014-2015 school year, an average of 142,308 students ate breakfast in CPS—an increase of 4.7 percent from the previous school year, according to the by the Food Research and Action Center (FRAC).

Although not a top performer, CPS has been steadily reaching more students with its breakfast in the classroom program. During the 2005-2006 school year, only 28.7 students ate breakfast for 100 that ate lunch. During the 2014-2015 school year, that figure jumped to 59.7 students. Although that’s slightly higher than the average of 54.3, it still ranks CPS at 42 out of 73 school districts.

In honor of National School Breakfast Week, we celebrate the good work all breakfast champions do to support healthy students and their learning. We look forward to continuing to work with CPS to improve and expand its breakfast program.