How Cooking up Change Districts Are Improving School Food 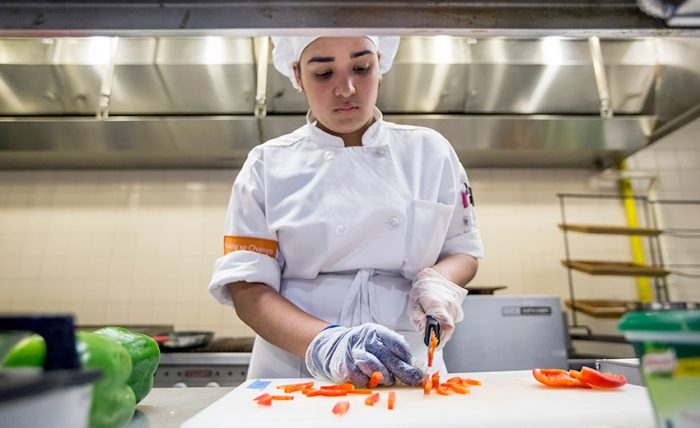 Earlier this summer, student chefs from across the country joined us in Washington, D.C., for the Cooking up Change National Finals. The menus all of the teams created showcased what’s possible when school food standards are seen as an opportunity rather than a limitation.

But they aren’t the only ones taking advantage of that opportunity. Cooking up Change school districts across the country are making changes in their school food programs that is making school food healthier for their students. Serving Cooking up Change winning meals is just one part of that equation.

These districts are inspired by the work of Cooking up Change student chefs. The executive director of food and nutrition service for Boston Public Schools, Laura Benavidez, touched on the grit that the Cooking up Change districts have behind supporting healthy school food: “When someone tells you it can’t be done, find a way. Our children’s nutrition is depending on us to be the forward-thinkers, the roadblock eliminators and, above all, the people who find a way around the ‘no.’”

Each Cooking up Change district has found a unique way around the “no” and developed more ideas to break through the roadblocks, paving a healthy future that all districts can follow.

Many of these ideas focus on providing fresh, local food. These farm to school initiatives are providing students an opportunity to eat what they grow and participate in education activities related to agriculture, food and nutrition. Detroit Public Schools Community District is currently tending a 2-acre farm (an area that is a little bigger than two football fields) that produces a variety of fresh fruit and vegetables the students are able to enjoy. Chicago Public Schools has also been focusing on procuring food from local farmers, purchasing more than $10.2 million in local produce in the past four years. In Dallas, students are being introduced to local produce through Harvest of the Month programs.

Increasing access to school food is another key initiative of Cooking up Change districts. Boston, Chicago and Detroit (covering nearly half a million students) have implemented the Community Eligibility Provision, which allows schools that meet a threshold of students qualifying for free and reduced-price meals to offer free meals to all students. Community eligibility reduces the paperwork burden on districts that have high numbers of students that qualify for free and reduced-price meals and removes the stigma of accepting a discounted meal.

One point of contention is the sodium targets. Although USDA Secretary Sonny Perdue announced an intention to roll back the sodium targets, Cooking up Change districts aren’t looking back. Benavidez, from Boston, explains: “Our school district will continue to abide by the Target 2 sodium standard that reduces the amount of sodium in the food our children eat. Because many of our students eat two or three meals a day at our schools, Boston Public Schools believes in providing the most nutritious meals that we possibly can.” In fact, all of the meals Cooking up Change student chefs created met the Target 2 sodium standard—and many of the meals met the final target!

Nona Bennet, the food and nutrition coordinator from Deer Valley Unified School District in Phoenix understands the importance of student satisfaction with the meals, but also describes the reward of exploring different meals. “Keep trying new recipes, ingredients and cooking methods,” she says. “Exposing students to new items will broaden their horizon and will help develop tastes for healthy foods. Getting students’ buy-in is crucial to the success of new menu items.” A great idea that their district will explore is trialing a seasoning station for students to experiment with new flavors.

Chicago and Dallas, as part of the Urban School Food Alliance, have expressed their support for the current school food standards. The Urban School Food Alliance, which represents seven of the largest school districts in the nation, said in a statement that it will continue to “partner with the USDA in the K-12 arena by leading in reducing food costs and by setting standards and volume procurements as appropriate.”

We love the initiatives that the Cooking up Change districts have implemented or are planning to take affect this upcoming year. We encourage other districts and schools around the country to apply similar targets into their school’s plan so all students can learn and thrive in healthy school environments!