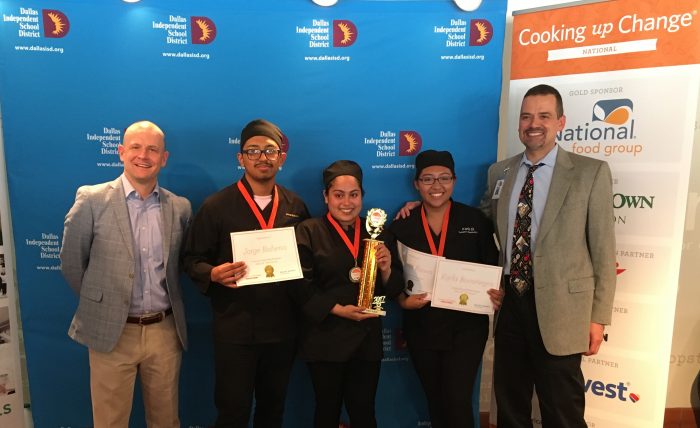 The creative student chefs gave Zecman some ideas to take back to the research and development team at National Food Group. “We had never thought of a lemon applesauce, but one of the teams made that,” he says. “So I thought, ‘Let’s see what we can do with that back at our office.’”

Another team created a fruit dish with day-old bananas mashed with cinnamon. “Normally, 90 percent of those bananas would end up in the trash,” Zecman says. “I love the way they repurposed that into a dish kids would eat.”

National Food Group was so impressed with the students and the program, they decided to sign on as a national sponsor. National Food Group is a leading food service distributor to K-12 schools across the country, including Detroit Public Schools, and is the largest supplier of applesauce and fruit cups in K-12 schools in the U.S.

Zecman traveled to Dallas to serve on the judging panel, and he had such a great experience that he also went to Phoenix to be part of the judging panel there in early May. National Food Group staff have been attending local competitions in cities across the country. They’ll also be joining us at the Cooking up Change national finals in Washington, D.C., next month.

As a food service provider, ensuring that students have healthy food is core to the company’s mission, and National Food Group understands the challenges that come along with making school food healthy, affordable and appealing to students. Its food offerings have to follow the same USDA nutrition requirements that Cooking up Change students do.

That’s why it’s so inspiring to see the creative ideas the student chefs come up with. “They’re taking products that we all eat, but putting their own twist on it and making them into products that kids would eat,” Zecman says.

And those student chefs are the best part of the program, Zecman says. “The winning team, the emotion, it’s great,” he says. “We were blessed in our judging group to have the previous year’s winner, and he was talking about how the program had impacted his life. That was really cool to hear.”