Cooking up Change on Inside School Food Radio 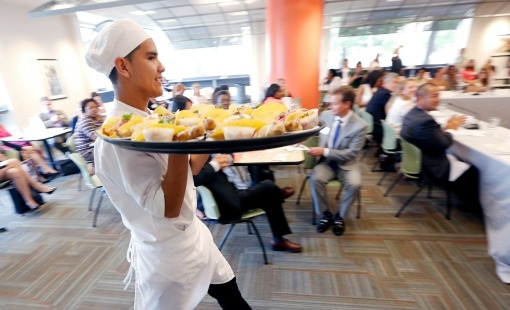 Here at Healthy Schools Campaign, we look forward to new episodes of the Inside School Food radio program each and every Monday. It’s an engaging program that looks at school food through many different lenses.

Host Laura Stanley recently took a deep dive into the reauthorization of the Child Nutrition Act (CNR), which is expected to start later this summer. The episode featured Jacqlyn Schneider, policy director for the Senate Agriculture Committee under Ranking Member Debbie Stabenow. She shed some light on the complexity of the CNR process.

She highlighted some of the challenges facing CNR, including the lack of positive messaging around what schools have been able to do to meet the meal standards set out by the most recent version of the act, 2010’s Healthy, Hunger-Free Kids Act. The most recent data from the USDA’s Food and Nutrition Service show that 95 percent of schools are successfully meeting the updated meal standards, but many of the stories in the media focus on what schools haven’t been able to do.

“We really do need to see some of the positive messages out there in terms of what’s going on on the ground,” said Schneider. “We do have tremendous successes that are going on throughout the country in meeting the meal standards and some of the creative solutions that schools are coming up with to get there.”

On that point, Schneider gave a shoutout to our Cooking up Change program as a prime example of the creative cooking that is going on across the country. Cooking up Change challenges high school culinary students to create healthy meals their peers enjoy, and to do so while adhering to the nutritional guidelines, budgets and ingredient lists of the National School Lunch Program. But Cooking up Change is about much more than that; it’s about elevating student voices in the national conversation about school food.

It’s great to see that the voices of Cooking up Change students are able to reach those in a position to influence policy. Specifically, Schneider raved about a tasting event we hosted in June at the Senate Russell Building, where Cooking up Change student chefs served up samplings of their meals and shared their vision for school food with U.S. Senators and Senate staffers.

We encourage you to give the June 22 episode of Inside School Food a listen.

Earlier this year, we did a series that featured episodes of Inside School Food. You can read those blogs here.