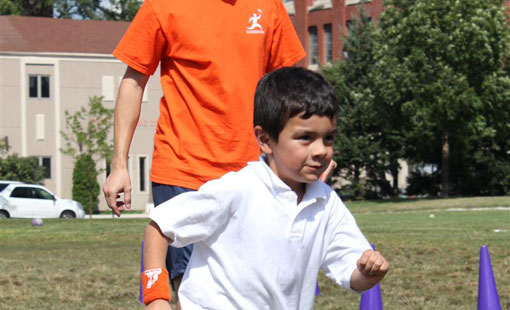 Two years after the district reintroduced daily recess, there have been some successes and challenges.

Today, elementary school students in Chicago Public Schools (CPS) are able to get the physical activity they need to focus on their studies through daily 20-minute recess.

But it wasn’t always that way.

For decades, recess was not a part of the school day for CPS students. That all changed when parents rallied in 2009 and submitted more than 4,000 petitions in support of recess. That effort was led by Parents United for Healthy Schools, a Healthy Schools Campaign coalition that brings together parents, principals, teachers and community leaders.

In 2010, after receiving the petitions, the district formed a Recess Task Force that put together the Recess Development Plan, which was used to implement physical activity into the school day. And in 2011, the district announced it would reintroduce daily recess in the 2012 school year. CPS was the first large urban district to once again require daily recess at the elementary and middle school levels.

“Our mission is to provide students in K-8 first and foremost with physical activity but also a place to practice age appropriate social skills,” said Julia Goetten, a school wellness specialist who oversees recess and physical activity at the CPS Office of Student Health and Wellness (OSHW).

Recess is a time for non-instructional physical activity and is a complement — not a replacement — for formal physical education. The non-instructional time actually helps students be their best learners. Studies show daily recess improves students’ behavior in the classroom as well as has a positive effect on their ability to focus throughout the school day. Studies also show that having recess before lunch helps students eat a more balanced, healthier meal at lunch time. Daily recess in schools means active playtime for the kids who need it. Every child deserves to run and play.

CPS schools have been implementing daily recess since 2012, and Goetten said that all K-8 schools across the district now have daily recess. So what have they learned in these last two years?

According to Goetten, there’s no one size fits all model. “Recess looks different at most schools,” she said. “We’re trying to give schools support to make recess as successful as possible. Not all schools have a playground or an outdoor space where they can hold recess.”

Another lesson learned is that it takes partnerships to make recess work. One school, Reavis Elementary School on Chicago’s south side, divides its recess space into activity zones. On the school’s basketball courts, students play basketball, Knock Out or Horse. On the school’s field, students play kickball, flag football, tag and running games. On the sidewalk, students jump rope, draw with chalk or play Simon Says.

McCormick Elementary School, which started implementing recess in 2009 with the help of Parents United for Healthy Schools, learned valuable lessons about implementing recess. The first step toward recess was the formation of a wellness team that ensures children are participating in healthy behaviors at school. This team includes the principal, parents, teachers, a lunchroom manager and community members who create wellness policies and implementation strategies for the school. McCormick utilized all the resources they could to help bring back recess; getting everyone involved contributed to the success of the program. Teachers also say that students reap the emotional, social and psychological benefits of recess.

One of the challenges to implementing recess has been filling the positions of recess supervisors, Goetten said. Recess supervisors can be a mix of people, such as school support staff, security guards and parent volunteers. “We provide as much training as possible,” she said.

To ensure all recess supervisors have the skills they need to make recess successful, OSHW provides training workshops throughout the year. The next recess supervisor training will take place on March 19 from 2-4 p.m. HSC has also provided training sessions for parent recess monitors.

In addition to trainings, OSHW provides resources to help jump start recess plans, such as:

Despite some of the challenges in implementing daily recess, it’s been a huge victory for parents, teachers and students. Every CPS K-8 student now gets the opportunity to engage in non-instructional play every single day that ensures students are prepared to learn in the classroom.

Previous
What Does it Take to Win Cooking up Change?
Next
GCA Winner, Clarke County School District, Leaves No Nook Uncleaned