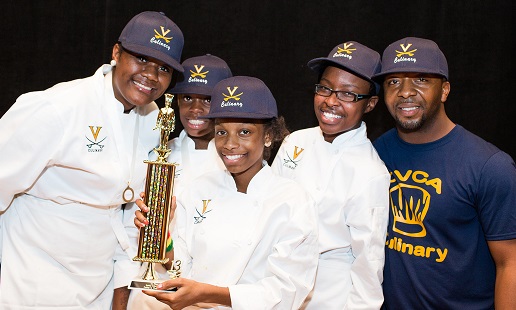 Now that the school year has come to a close, we’re celebrating the many ways that CPS has made progress toward goals outlined in the 2012-13 Pathways to Excellence in School Nutrition report, a joint project between HSC and CPS.

One important goal identified in the report was for CPS to offer nutritious school meals that are more appealing to students. By participating in HSC’s annual Cooking up Change competition, one team of student chefs has helped CPS do just that.

Chicago Vocational Career Academy (CVCA) students Mallory, Elira and Shawnlaun took on a big challenge last fall. Cooking up Change challenges teams of student chefs to dream up their own recipes for school food, creating a meal that their peers will enjoy while meeting the USDA’s high nutrition standards.

Healthy school meals are critical when you consider that one in three children in the U.S. are overweight or obese, and that most children consume up to half their daily calories at school. Nutritious meals are about academic achievement, too. Research shows that students perform better academically when they eat nutritious foods. Plus, a positive dining experience and knowing where one’s food comes from are linked to other benefits including better social skills, a solid sense of community and respect for the environment.

By participating in (and winning) Chicago’s Cooking up Change contest, the CVCA team supported CPS’ ongoing efforts to create meals that not only meet the USDA standards, but also appeal to kids’ tastes. In fact, they took their cues from one of CPS’ biggest efforts: local procurement. According to CVCA culinary instructor David Fuller: “This year’s team was adamant about wanting more fresh food in school lunches and not so much processed food. That was part of their inspiration for the curry chicken recipe.”

The locally raised Amish chicken helped them stand apart at the national Cooking up Change competition on June 9. “Our chicken is very unique… it's a free-range chicken, and only Chicago Public Schools has it,” said Mallory.

CVCA’s winning meal was offered across CPS this winter to more than 400,000 students. And that’s not the only student-designed meal on the menu. At least once a month, CPS includes a student recipe developed by Cooking up Change participants.

By embodying the principles outlined in the Pathways to Excellence in School Nutrition report, the CVCA culinary team proved that it’s possible to create healthy meals that appeal to students. Mallory said: “Kids love spicy food. We wanted a meal that would make us feel more at home.”

Learn more about the CVCA team and stay posted this fall for Chicago’s next Cooking up Change competition.

View the full 2012-13 Pathways to Excellence in School Nutrition report.