Deb Eschmeyer: The Right Person at the Right Time 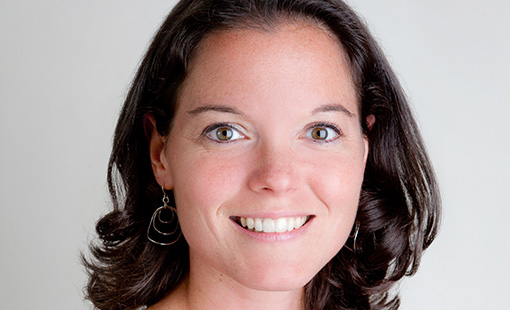 While working at the National Farm to School Network, Deb was an important part of the team that helped us take Cooking up Change from a local Chicago event to a national competition. We’re excited to work with Deb in her new role.

With his departure from the White House as senior advisor on nutrition and executive director of the First Lady’s Let’s Move! Campaign, Sam Kass left some pretty big shoes to fill. However, it appears the administration has found the perfect fit in Deb Eschmeyer, who just this week took over Kass’ role.

Kass championed the cause for healthier school food and was the administration’s point man in what became a somewhat surprisingly contentious and partisan battle to implement and uphold the USDA’s updated school nutrition standards. At the outset of a critical year for student health — with the Child Nutrition Act up for reauthorization, and with it, a full review of the school nutrition standards — the White House has moved quickly in appointing a strong national leader on a broad range of nutrition issues, not the least of which are nutrition education and healthy school food. With Deb at the helm, the gains that have been made by schools and school health advocates over the past few years are in good and capable hands.

While working at the National Farm to School Network, Deb was an important part of the team that helped us take Cooking up Change from a local Chicago event to a national competition, when we hosted the first Cooking up Change national finals in Detroit at the Farm to School Network’s 2010 national conference. Since that time, we’ve been strong supporters of Deb’s work, including her co-founding of FoodCorps, which is proof of her ability to take a good idea and turn it into a national movement.

In the official White House announcement, the First Lady said: “For more than a decade, Deb has been leading the way in teaching kids about the importance of healthy eating. From classrooms and gardens to kitchens and farms, Deb as made learning about nutrition fun and accessible for kids across the country.”

And that’s really what the next round of the national “food fight” is all about: ensuring that kids continue to learn about the importance of healthy eating and making healthy food accessible to all students.

It’s clear that Deb understands the connection between healthy school food and student performance, as well as the role schools can and should play in combating childhood obesity and other health issues that far too many of our kids face, and in helping kids build healthy, lifelong habits by learning about the food they eat.

At Healthy Schools Campaign, our mission is to make schools healthier places for students to learn and grow, and we’re happy to know that there’s a place in the White House for someone like Deb Eschmeyer, who we know feels similarly through her support of our work.

But first things first: The next two years will be critical in continuing the progress that’s been made to serve healthier meals to 30 million children each day in our nation’s schools, and in the process, helping them learn about the types of foods that will fuel their learning and growth. When Deb took the job, upholding and advancing school nutrition standards was no doubt at the top of her priority list. We’re excited to work with Deb in her new role to make that happen.

Previous
Listen Along with HSC: Inside School Food Radio Goes to Georgia
Next
Removing Candy from the Valentine’s Day School Equation