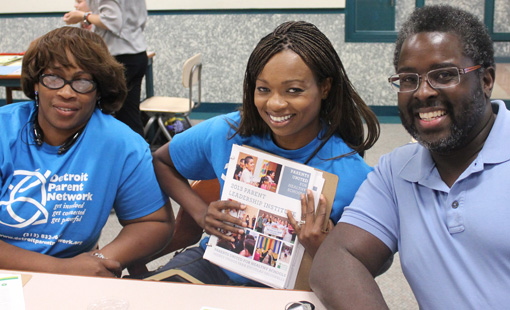 Last month at the Parent Leadership Institute, we welcomed a team of Detroit-based community organizers. From the Detroit Parent Network (DPN) and the Detroit Food & Fitness Collaborative (DFFC), they attended the Institute to learn strategies for engaging their fellow parents on school health and wellness issues.

We’re always seeking to ensure that our work inspires others and serves as a national model, and our guests from Detroit are natural collaborators. As Sharlonda Buckman, Executive Director of DPN, explains, DPN is rooted in a philosophy similar to Parents United: parents can be great advocates and leaders on school health issues and should be given the resources to do so.

“We exist because when issues in education reform came up, there was somebody speaking for the interest of almost everybody, but no one was speaking for the interests of children,” Buckman said. “We said, who better to speak for kids than parents?” The organization serves 30,000 parents at 11 resource centers throughout Detroit, primarily with a focus on parent engagement around education issues.

Like HSC and Parents United, the team from Detroit believes that healthy students are better learners. Buckman sees the Parents United model as an effective way to get parents involved as stakeholders, and it could be something the DPN, DFFC and partner organizations could modify and roll out in Detroit.

“Because they are forming communities where parents are working together with schools and working together with community leaders, all of whom would agree that health and nutrition are important issues, it cuts across stakeholders. It makes the child the central focus of the process,” Buckman said.

Buckman sees parent engagement as a way to create an avenue for advocacy and give policies “more teeth.”  Buckman said that in Detroit, despite recent strides, issues still exist. Challenges include :  schools stocking vending machines with unhealthy snacks; schools serving fried foods for school fundraisers; and the need for a section of the district wellness policy that encourages teachers to model healthy behavior.

Garry Bulluck, Project Director at DFFC, was excited to see the energy in the parent leaders who are working to build coalitions around this work. He said for him, one of the key takeaways from the training was ensuring parents have assets and resources to participate in trainings like this, such as child care and take-home materials.

“I think [the Parents United] model offers something that a lot of professional groups don't take into account,” Bulluck said. “They expect a parent to come [to an event]  just because they said to come. Life happens, and you have to give parents the resources so they can participate.”

Moving forward, the Detroit Parent Network and Detroit Food & Fitness Collaborative will continue to work with Parents United and HSC. Buckman says that the team plans to bring HSC’s Vice President of Urban Affairs Guillermo Gomez and a coalition of parents to Detroit to set up the infrastructure for a similar parent engagement program.

Thank you to Sharlonda Buckman, Garry Bulluck and the group from Detroit for joining us at the Institute.