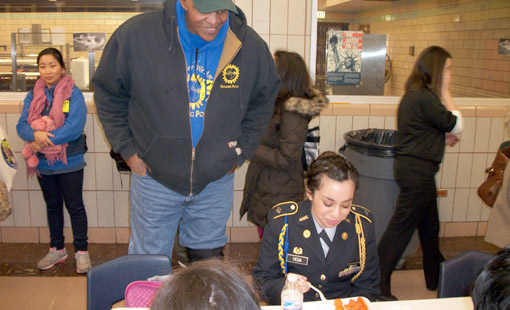 Above: Growing Power founder and farmer Will Allen visited CPS schools on January 15.

It’s not every day that carrots steal the spotlight. But on January 15 in Chicago Public Schools (CPS), everyone was talking about the familiar orange veggies. That day, Growing Power, a nonprofit organization based in Milwaukee, delivered 36,000 pounds of carrots to CPS. That’s one for the record books: it was the country’s largest-ever purchase of fresh, farm to school produce. And unlike most vegetable deliveries, this one included a visit from the farmer himself.

At four schools, Growing Power founder and farmer Will Allen dropped in to tell students about the life-changing power of agriculture. For teacher Marnie Ware, while it was incredible to see fresh farm to school produce in her students’ lunches, Allen’s talk served up even more inspiration. Ware, a teacher at Prosser Career Academy, has been actively trying to start a school garden with students in the ecology club. It’s ambitious project that’s nearing fruition after two years of work — and meeting Allen solidified her students’ resolve.

She said: “He’s driven and passionate, and the most important thing is, he talked about what they could potentially be doing with food.” She says that after hearing him talk about the importance of growing healthy food, “it was such a catalyst for inspiration. Our ecology club has been even more vibrant and people are getting more excited about the school garden.”

The carrots made a long journey from seedlings to superstars, with HSC championing farm to school all the way. Last year, HSC worked with CPS to form advisory groups of parents and other school stakeholders, which recommended increasing farm to school procurement. To bring farm-raised chicken to CPS, HSC helped develop a partnership that led CPS serving scratch-cooked, hormone free Amish-raised chicken drumsticks. HSC has also promoted CPS’ farm-to-school program by including local ingredients in Cooking up Change, our healthy cooking contest for CPS culinary students.

This particular Growing Power purchase was made possible by CPS, the technology firm FarmLogix and the food service company Aramark, each playing a role in the carrots’ journeys from seedlings to superstars.

Learn more about the collaboration between FarmLogix and CPS.

Fowler says, “Being able to identify when produce is available and where it’s from will give us a better ability to ‘menu’ those items. Growing our relationship with Aramark and Farm Logix allows us to do that.”

Fowler says that when kids know their food is coming from just down the road, it “makes them much more willing to try new things and engage in a new way.”

That was definitely true for Lorna Wilkins’ students. In fact, long after Allen and his carrots made their appearance at Ellington Elementary, kids’ demand for all kinds of veggies has only risen. She says: “They have taking a liking to vegetables! I was surprised to see them eat cauliflower the other day. And last week we had snap peas. They were like, ‘I didn’t know we could eat these raw!’”

More farm to school produce is pouring into lunchrooms than ever before, according to the USDA. And fortunately for Wilkins’s class, CPS purchases are leading the way. Over the past three school years, CPS bought more than $4.2 million in produce from regional farmers. In fact, in just the past four months, CPS has already sourced more than $1.5 million of locally grown healthy foods for Chicago students.