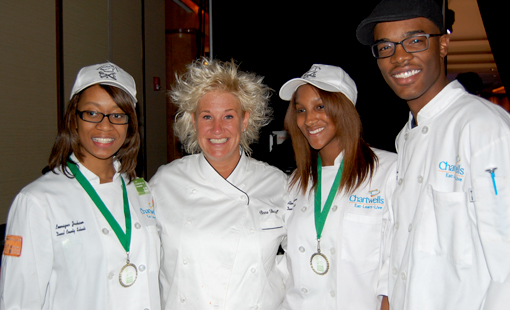 Two all-star chefs. A head-to-head challenge. Sounds like the premise for the newest Food Network competition show, doesn’t it? Instead, chefs Jose Garces and Anne Burrell were devoting their time and talents to a different kind of competition — and they were judged by former winners of Cooking up Change Jacksonville.

Two all-star chefs. A head-to-head challenge. Sounds like the premise for the newest Food Network competition show, doesn’t it? Instead, chefs Jose Garces and Anne Burrell were devoting their time and talents to a different kind of competition — and they were  judged by former winners of Cooking up Change Jacksonville.

Earlier this month, Partnership for A Healthier America held its annual Building A Healthier Future Summit, which included this cornerstone event, the Great American School Lunch Challenge. Garces and Burrell were tasked with the challenge of creating a healthy, enticing school lunch with the typical constraints of school food service.

Two years ago, the Cooking up Change team that included these students not only won their local competition. They also went on to take nationals in D.C., continuing to make an impact in the conversation about school food and even meeting First Lady Michelle Obama along the way.

This month they had the chance to turn the tables by judging culinary professionals. The parameters for the Great American School Lunch Challenge are similar to those used by HSC’s Cooking up Change healthy cooking competition. HSC partnered with PHA on developing the process for their competition.

When the students found out who they’d be judging,  it was quite a surprise.

“The two Food Network stars?” Singletary says. “I didn’t see that happening, them asking my opinion on [their food]. That was kind of crazy. We don’t have those same palates yet, but I thought it was pretty cool that we could give the younger generation’s point of view.”

As culinary students, the team members enjoyed the opportunity to observe and learn from two professional chefs working in the kitchen at the same time, from the inspiration for healthy ingredients to being able to take notes on their technique and time management in the kitchen.
And when it came time to judge, Burrell and Garces hung on their every word.

“Anne Burrell actually looked a little bit nervous, which was kind of interesting,” Jackson says. “Chef José was a little more level-headed. But both really wanted to know the results.”

This contest represents one more way that we’re hearing the same message, all across the country: Resources for healthy school food are often limited, creating many challenges for school and food service organizations. But with creativity and a commitment to health at the forefront, it is possible to create healthy, delicious school meals.

“Students want more interesting and more appealing food in the cafeterias that’s both healthy and delicious at the same time,” Jackson says. That’s challenging, because you have to incorporate all those things, but it is possible.”

We’re excited to hear that Singletary continues to compete, most recently in a vocational student competition which also included events for robotics, automotive and other industries. In his A.P. Environmental Science class, he’s learning more about where food comes from and continuing on his track of healthy cooking and eating.

Jackson is reviewing work for her culinary arts classes, studying up on professional baking and working in her school’s full-service restaurant. She has been applying the lessons of Cooking up Change (and now, the Great American School Lunch Challenge) to her studies, often working within those same school lunch guidelines to make delicious, healthy new creations, even in the field of professional baking.

“You get to learn while having fun and actually see how healthy food looks,” she says. “You learn about healthy alternatives. Instead of cookies and chips, you can make delicious, healthy desserts.”

As former Cooking up Change winners, Jackson, Singletary and Baldwin, have remained close and continue to learn from one another as they prepare to pursue their careers. “There isn’t a week that goes by where we don’t bring up something that happened at Cooking up Change,” Jackson says.