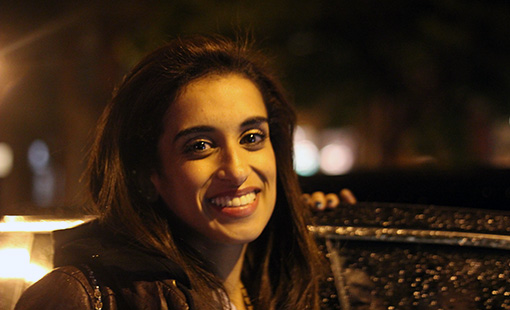 “Our similarities have brought us together”

Dalal Albohamad is currently spending a two-week, in-depth internship with HSC as part of a program arranged by the American Council of Young Political Leaders (ACYPL) for young economic and social entrepreneurs from the Middle East and North Africa. In her home country of Kuwait, Dalal is a program manager for Health Empowerment Youth Association (HEYA), a newly formed obesity prevention initiative. During her time in Chicago, Dalal is observing how HSC combats childhood obesity through preventative, school-based initiatives, such as our Fit to Learn and Health in Mind programs.

It seems that this time, it is not our differences, but our similarities that have brought us together. I am from the small, Middle Eastern country of Kuwait. I am fortunate to have been chosen to participate in an exceptionally unique program called the Active Citizen Summit 2.0, which has been organized by the American Council of Young Political Leaders. Over 16 days in Chicago and six days in Washington, D.C., the program involves a variety of training sessions, primarily focused on leadership, with a two-week tailored internship based on our individual areas of interest, which is how I have arrived here at HSC.

In Kuwait, I am involved in an obesity prevention initiative called HEYA, which shares a similar mission to that of HSC. You see, despite the fact that Kuwait is a very small country located on the other side of the world, when it comes to certain cultural aspects, we are not all that different from the United States. Kuwait is a nation that appreciates art, culture and food — and we sure do enjoy a good burger!

That being the case, we’re also a nation that suffers from a fairly unhealthy lifestyle that has resulted in a high rate of childhood obesity, similar to the situation in many U.S. cities. In Kuwait, a 2011 study revealed that 50 percent of students between the ages of 13 and 15 were overweight, 22.6 percent were obese, and only 21 percent were considered physically active. Further, 48 percent eat fast food more than three times per week, so I guess you could say that Kuwait is also a fast food nation. Sadly, I fear that those statistics have only worsened over the past three years.

So what can we do? That is why I am here. Being in Chicago for the past week and learning about HSC’s efforts to promote physical fitness and healthy eating habits in schools has been very enriching. I have had informative meetings with the staff, I have visited schools and parent meetings, and I have learned more about HSC’s multidimensional programs aimed at creating healthier school environments. In Kuwait, we have invested heavily in treating the symptoms of obesity, such as diabetes, but little action has been geared toward prevention. My hope is that I model in Kuwait some of the preventative measures that are being implemented by HSC in Chicago and nationally.

One of the things that I have learned so far is that small changes that can have a large impact. In Kuwait, we can learn from some of the small but impactful changes that HSC is making through school fitness and nutrition programs like Fit to Learn and Cooking up Change. It will be interesting to see how similar programs could be implemented in a different part of the world.

I have one more week to go here in Chicago then I am off to Washington, D.C. I will report back next week with some additional reflections on my HSC internship.

Thank you, Dalal, for sharing this experience with us!

Previous
Notes from New Zealand: ‘Learning with the Pulse of the Planet’
Next
A Global Conversation on School Health