Healthy Changes, One Step at a Time 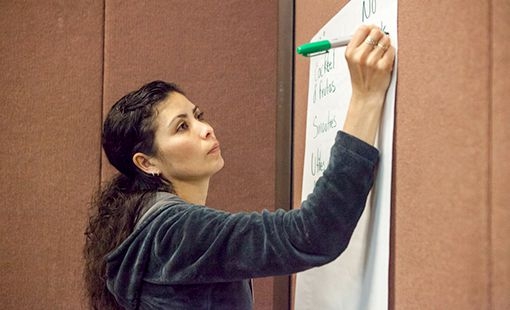 Enriqueta Raygoza knows that making healthy changes in schools requires determination and hard work. Through her involvement in Parents United for Healthy Schools — HSC’s coalition of parents from across Chicago that advocates for healthy school environments — Enriqueta has received the training and confidence she needs to make those changes.

Parents United was formed in 2006 out of concern for the skyrocketing rates of childhood obesity and the growing health disparities among the Latino and African-American communities in Chicago. Parent leaders from Parents United work with school staff and local school councils to combat the childhood obesity epidemic by making health a priority at their children’s schools, which includes implementing new wellness policies, forming wellness teams and improving school food.

A few years ago, Enriqueta was asked by parents to join the wellness team at Nathanael Greene Elementary School on Chicago’s southwest side. One of the projects she spearheaded was helping the school host a walk-a-thon fundraiser. Parents and the school worked together to pull off the event, which was a lot of work, Enriqueta said, but also a huge success.

She has now taken what she’s learned at Greene and started working with the administration at Brighton Park Elementary School, her daughter’s new school. Starting from scratch is not easy, but the school is starting to make healthy changes. The school’s popular ice cream social has now been changed to a smoothie party. The children really enjoy the smoothies because they still can to pick their own flavors, Enriqueta said.

Brighton Park has even started to take a healthier approach to classroom celebrations. Where Halloween parties that centered around candy were the norm, some teachers are now incorporating healthier snacks such as fruit cups and citrus-flavored water. Creating these changes required a lot of teamwork and persistence — which showed Enriqueta the importance of parent involvement. “Parent voices are important because together we can make changes,” she said.

Enriqueta has worked through challenges at home, too. Her daughter has asthma, but the family still manages to go running and dancing together. She has incorporated healthier recipes — many of which she found through her involvement in Parent United — into the family’s menus.

And Enriqueta is starting to see the reward of this hard work pay off — both at home and at school.