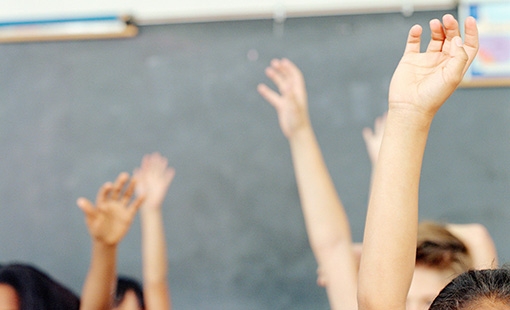 This May, HSC proudly announced the winners of our second annual School Nurse Leadership Award. It’s an award that acknowledges the tireless commitments that school nurses make, and is supported by School Health Corporation and MAICO Diagnostics. The five winners and five honorable mentions selected from across the country represent school nurses who are reimagining the role they play in school health and wellness, students’ academic success and the health of the larger community. In this blog, we speak with award-winner Eva Stone.

Students can’t learn if they aren’t in school.

It seems like a simple enough fact, but many school districts struggle with students who are chronically absent, which is generally defined as missing 10 percent or more of school days.

Eva Stone, the coordinator of school health for Lincoln County School District in rural Kentucky, struggled with attendance problems in her district of 10 schools and 4,000 students — 70 percent of whom qualify for free or reduced-price lunch. About three years ago, Stone decided to take a closer look at the data and found that a small number of students were accounting for the bulk of absences across the district.

She helped develop a team at each of the district’s schools consisting of the principal, school nurse, family resource and youth service center coordinator, school counselor, attendance clerk, director of pupil personnel and herself. These teams meet regularly to discuss the needs of the students that are missing school. When calculating chronic absence, the district looks at both excused — for illness — and unexcused absences.

Once the needs of students are identified, the group plans targeted interventions. For example, if a student is homeless or not able to get enough food on the weekend and that’s affecting attendance and school work, the school nurse will connect that student’s family to appropriate social support systems.  “When we have nurses in place, we can work more closely with the families and get them the resources they need,” she said.

And the approach is working. In just one school year, the district was able to significantly lower the rates of chronically absent students. In one school, the rate dropped from 9.8 percent to 4.4 percent. All 10 schools in the district — including the alternative high school — saw decreased rates of chronically absent students.

One specific intervention Stone spearheaded was changing the district’s policy surrounding head lice. She noticed that students would often miss weeks at a time for head lice. At the time, the district had very few policies in place regarding head lice, and any staff member was allowed to determine if a student had lice. Children were not allowed in school if they had nits — or eggs — only rather than full-grown lice. This policy was not in line with recommendations from organizations such as the Centers for Disease Control and Prevention and the American Academy of Pediatrics, which recommend that students should be allowed in school with nits.

Stone went to the director of pupil personnel and compared the district’s policy to what the guidelines said. “We then began a process to request a change in policy through our local school board,” she said. “It was a slow process, but eventually the new policy passed.”

The “no nit” policy is a problem for many districts across the state. Around the time she was working to change her district’s policy, Stone was asked to join a workgroup with the Kentucky School Boards Association (KSBA), which recommends policies for school districts across the state, to look at the policy they were recommending to districts. The KSBA was promoting a “no nit” policy, so Stone asked the association to survey districts to determine how many days of school were being missed for head lice or nits. In a brief period, it was found that thousands of days of instruction were being lost across the state due to this issue. As a result, they revised the recommendations made to local districts.

Before changing the policy, Lincoln County had the second-highest dropout rate in the state. That is no longer the case, Stone said.