How a School Cooking Show Teaches Kids About Healthy Eating 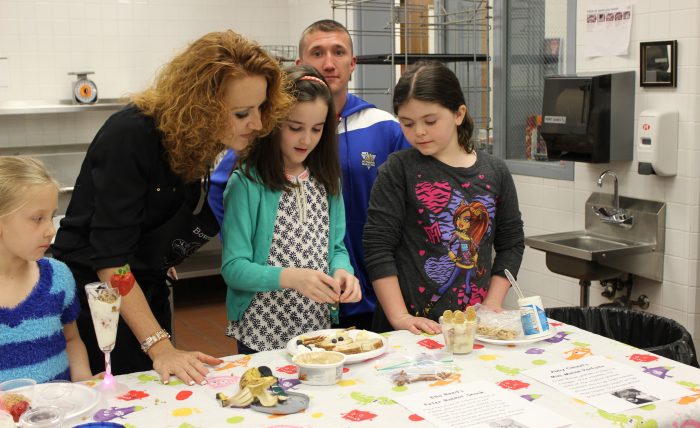 After American Federation of Teachers (AFT) members Tammi Hanak and Meghan Myers attended a conference on childhood obesity, they returned to Bower Hill Elementary School near Pittsburgh with a great idea: a cooking show.

Hanak already hosted the K-3 school’s internal TV show, so she was a natural fit for the host role. The show would feature kid-friendly recipes—no cooking and no knives. The show, called “Snack Scene at 3:15” has been a huge hit at the school.

The show builds on success that Hanak and Myers and the wellness committee had with a marathon called Kids of Steel. The marathon asks young people across ten counties to commit to walking 25 miles, then come to Pittsburgh to run the final mile together. “What ties it all back is that in order to be an athlete, you need to eat like an athlete,” says Hanak.

The pair wanted to make sure the show resonated with school staff and students, so each and every week, student and staff guests make appearances. “We wanted to get a special guest for each show to get  faculty buy in and create a culture around it,” says Hanak. “We had a really diverse cast on the first year.” Those special guests included the school librarian talking about books on fruit and a custodian, who weight lifts in his free time, sharing his favorite protein-rich snacks.

At the end of the first year, the show hosted a Top Chef style competition in which students submitted recipes, and the top four from each grade level were chosen. Those finalists participated in a cook-off show, after which the entire school voted via SurveyMonkey.

The show really picked up during its second year. “Over the summer, we got really excited,” says Hanak. The year kicked off with an on-location show at a local apple orchard that introduces students to produce that they might not have been familiar with. That year, the show aired 36 times—almost one for each week of the school year.

Also that year, AFT invited Hanak and Myers to present at its annual Teach Conference. The duo also started a YouTube channel to broaden the reach of the show—including to proud relatives. “How they could show grandma when their kids are on,” Hanak asks. “Most of our kids knew how to use YouTube.” The YouTube channel also allows us to include one of the episodes in this blog. Check it out below!

We’re proud to call AFT a partner in our work as a sponsor of our Cooking up Change National program, and it’s great to see the innovative ways its members are supporting health and wellness in schools.