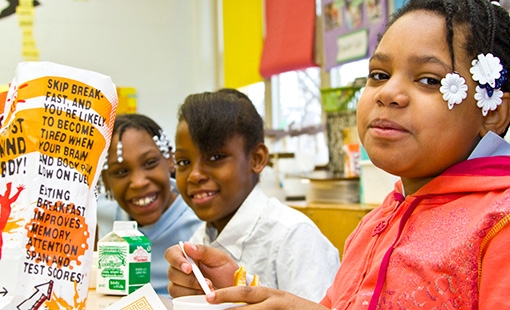 Chicago Public Schools offers universal breakfast in the classroom that makes sure all students are well-fed and ready for the school day.

Your mother always told you breakfast was the most important meal of the day, and research backs up that claim. Breakfast has a strong link to educational outcomes — even more so than other meals — because of the way the brain responds to food after the short fast during sleep. But for the one in five students in Chicago who can’t count on their next meal, eating a nutritious breakfast at home is rarely a reality.

Based on child nutrition studies conducted across the country, Harvard researchers have concluded that school breakfast helps children improve their standardized test scores, math grades, reading abilities, pay better attention and stay more alert. All students deserve to be their best learners, and providing students with a nutritious breakfast at school is one way to ensure all students get that opportunity.

Chicago Public Schools (CPS) instituted Universal Breakfast in the Classroom in 2011, and this week — National School Breakfast Week — has been a great chance to celebrate this important program.

Offering breakfast free to all students, often called “universal breakfast,” helps remove the stigma for low-income children of participating in school breakfast and is proven to increase participation. When CPS schools offer breakfast in the classroom, 60 to 70 percent of total students participate, said  Leslie Fowler, director of nutrition support services at CPS. When breakfast is offered outside the classroom — before school in the cafeteria — only 8 to 18 percent of total students participate, she said. “That says to me that those students are not ready for the school day,” Fowler said. “Breakfast in the Classroom ensures all our students are active thinkers when the school day starts.”

Breakfast is even more important for students who qualify for free or reduced price lunch and might not have access to breakfast at home. During the 2005-2006 school year, only 28.7 percent of CPS students receiving free and reduced priced lunches through the school meal program participated in the breakfast program. During the 2013-2014 school year, thanks in large part to Breakfast in the Classroom, that percentage rose to 58.1 percent.

The policy has been successful because of hard work within the district as well as the support of parents and the community. Parents involved in Parents United for Healthy Schools, Healthy Schools Campaign’s parent-led advocacy coalition, were instrumental in the effort to make breakfast in the classroom a reality in CPS.

With the help of Parents United, CPS began piloting breakfast in the classroom in the fall of 2007 at McAuliffe Elementary school on the city’s northwest side. The pilot saw immediate results. Participation in the program increased 250 percent, and student test scores improved more than nine percent. McAuliffe’s teachers also reported fewer discipline problems and increased student alertness.

Madero Middle School on Chicago’s southwest side began serving breakfast in the classroom during the 2009-2010 school year and Principal Jose Luis Illanes has seen a difference in the students. “It has been very successful for us. It gave us very good results in terms of helping the children have something in their stomachs before they start the instructional day,” he said. “It helps students to focus and to be more alert. Children are more prepared to start the instructional day when they have breakfast.”

Research shows what parents and teachers know: Healthy, well-nourished students are better prepared to learn. By offering universal breakfast in the classroom, CPS is ensuring more of its students are ready to start the school day.