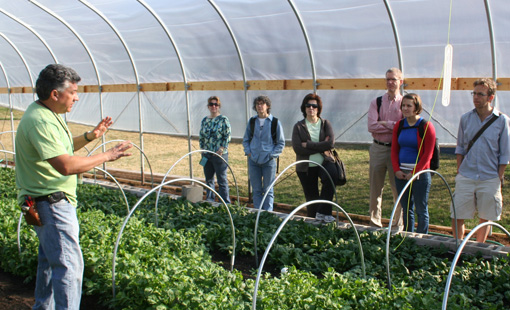 On March 15, FamilyFarmed.org presents a summit with a focus on locally sourced school food!

A little drumstick can make a big difference.That’s what Jim Slama and the team at FamilyFarmed.org believe, and last year, FamilyFarmed.org worked with a coalition of key partners, including HSC, Pew Charitable Trusts and School Food FOCUS, to help connect Chartwells Thompson, the dining services providers for many Chicago Public Schools, with local producers. Through these connections, Chartwells worked with family farmers in nearby Indiana to launch a chicken campaign, giving CPS students the same high-quality chicken raised without antibiotics. Chartwells has also purchased apples from farmers in nearby Michigan for CPS, as well as produce from Illinois and neighboring Midwestern states, all going back to school meals in those Midwestern schools.

“It’s been a great opportunity for farmers when schools are buying produce at that level,” FamilyFarmed.org founder Jim Slama says. “It’s really good for the movement.”

As part of its annual Good Food Festival in Chicago, FamilyFarmed.org is holding sessions devoted to school food on March 15th.

The summit features a variety of compelling panels related to improving school food, including:

Slama recommends the festival and summit to a number of parties involved in school health, from producers and food service directors, who benefit from the education focus and emphasis on best practices, as well as parents and nonprofits who care about this issue who can learn from one another and connect. He says the benefits of farm-to-school programs and local food sourcing are extensive, and cover nutritional, economic, educational and environmental areas, to name a few.

“School food service directors can learn a lot by coming to our conference, meeting the key players and learn how to take their program to the next level,” Slama says.

To register for all Good Food Festival events, search the schedule, connect with vendors  and more, visit GoodFoodFestivals.com.