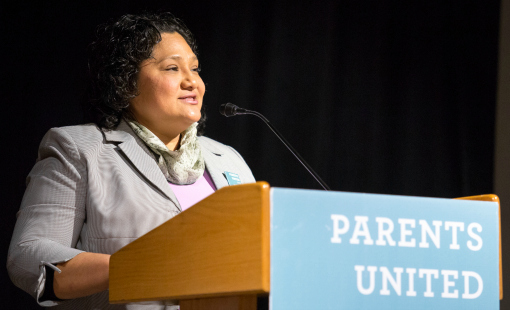 Three years ago, Maria de Jesus Cristobal, who goes by “Mari Chuy,” met Jovita Flores while volunteering at her children’s school and attended one of her healthy cooking demonstrations. Mari Chuy loved it. So she started bringing other parents.

Flores is the manager of Parents United for Healthy Schools, HSC’s coalition of parents from across Chicago that advocates for healthy school environments. The coalition was formed in 2006 out of concern for the skyrocketing rates of childhood obesity and the growing health disparities among the Latino and African-American communities in Chicago. As she began to learn more from Flores and become an active member of Parents United for Healthy Schools, she began to make the connection between the issues around eating healthy and being physical active faced by her family and the issues faced by her entire community.

Today, Mari Chuy, whose children ages 9 and 11 both attend McCormick Elementary School, leads those cooking sessions herself. She’s an active member of Parents United and visits schools throughout the city leading healthy cooking classes. She demonstrates such dishes as Chilaquiles Divorciados — chilaquiles with chicken and red and green sauce — and Pollo Hawaiano — chicken with potatoes, carrots, broccoli, pineapple, apple and grapes. Mari Chuy is always trying to find new and fun ways to encourage her kids to eat more vegetables and fruits.

But her leadership extends beyond cooking. Mari Chuy is an integral member of McCormick’s wellness team. A parent-led wellness team plans and implements school initiatives that promote a healthy school culture and learning environment.

With the wellness team, Mari Chuy has helped transform school fundraisers at McCormick Elementary School. Before, she says, fundraisers centered around gummy candies and candy apples. Now, she says, the school is slowly but surely shifting to fundraisers that don’t rely on unhealthy food. One such fundraiser is a movie night where children feast on popcorn (unbuttered, of course) and lemonade.

Making changes in schools is not easy, she said.

Mari Chuy closed out the 9th annual Principals’ Breakfast earlier this spring recognizing all the great work parents, principals and community members have achieved throughout the past year. But Mari Chuy doesn’t see her work as done — it’s an ongoing battle. “Us parents have to unite in order to fight for healthy schools,” she said.