Meet the Winning Team from Cooking up Change Wichita 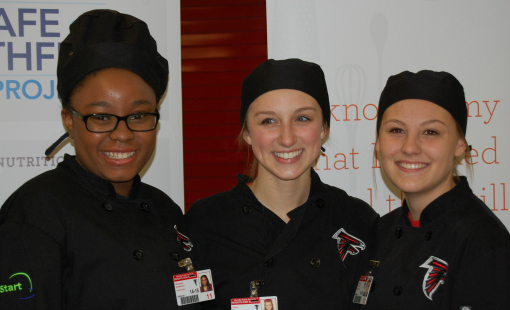 Heights High School senior and student chef Olivia C. used to use Pinterest, the popular image-based social network that allow users to collect images and links from around the web, to collect dessert recipes to make for her family.

When she entered the Cooking up Change Wichita competition with Colleen H. and Shaneen A., the trio searched Pinterest for a different type of recipe: healthy.

They found the inspiration they were looking for. Their resulting menu of BBQ chicken pinwheels; roasted, spiced potatoes and green beans; and pear crunch with vanilla drizzle so impressed the judges — including Audrey Rowe, administrator of Food and Nutrition Services (FNS) for the USDA — they took home first place at the competition on January 27.

But creating a contest-ready recipe from the inspiration they found on Pinterest wasn’t easy, and Olivia estimates they practiced the recipes more than 10 times to make sure everything was perfect. One challenge came in the form of the seasoning for the green beans and potatoes, said Shaneen. The seasonings had to add flavor without adding a lot of extra sodium — the full meal could only have 1420 milligrams of sodium. The students found the perfect balance with a mixture of Italian seasoning, garlic and pepper.

Another challenge, Colleen said, was meeting the meal’s calorie requirement. Once the students finished the recipes and began testing, they found the meal actually fell short on  calories. Meals are required to have between 750 and 850 calories. So they added cheese to both the chicken and the vegetable side dish. “Everything is better with cheese,” said Colleen.

When their names were announced as winners, they were all shocked, they say.

As for the national competition in Washington, D.C., Colleen says the team will continue to practice and perfect their recipes. Olivia says the team is looking at some fundraising plans to get new shoes and pants; they just got new chef’s coats.

Student chefs from seven Wichita high schools participated in the city’s Cooking up Change competition, and they all did a great job. Three cheers for the following students for representing their schools and their city with some delicious — and healthy — dishes: