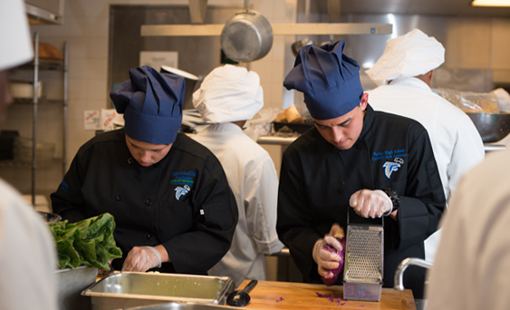 National Cooking up Change winners, announced! Santa Ana Valley High School wowed the judges and the audience with their meal.

For the first time, our Cooking up Change winners not only brought home back-to-back national titles for their region, but for their high school. When the students from Santa Ana Valley High School, winners of Cooking up Change Orange County, were announced as the national winners in Washington, DC, the room was electric.

Valley High School students Cesar Amezcua, Carlos Ortiz and Cecilia Magaña wowed the judges and the audience with their meal of “Pita-Packs-a-Punch,” a pita filled with ground turkey and colorful veggies served with a side of hot and sweet slaw, and their delicious apple crêpes, one of Amezcua’s specialties.

For this team, the win was particularly special. Magaña and Ortiz participated in Cooking up Change Orange County (formerly Cooking up Change Santa Ana) last year and finished second at the regional level. Not only did they work hard and come back to win regionals, but they took home the trophy.

At the judges’ table, the Orange County team presented its meal and talked about the inspiration behind it. Magaña talked about one of her key motivators — her family, especially her 18 young nieces and nephews. “They don’t eat as healthy as they could, so I want to teach them how to eat healthier, how to make substitutions,” she says. “Like instead of cookies, they could have apples, and they should know how juicy and tasty they could be.”

For these students, the contest is more than just about who wins, however. It also provides invaluable, practical kitchen experience that will serve them in their future careers and offers some important lessons about school food. Magaña and Ortiz both noted that the contest was a huge eye-opener for them about the real-world challenges faced by school food service programs. On Tuesday, students participated in a legislative briefing about the need for more investment in healthier school food and school kitchens, and even met with their legislator, Rep. Loretta Sanchez.

“I think it’s easier said than done to make the change to healthy food, but as long as we keep pushing and keep insisting, people will see that we need this change in order to help our community,” Ortiz says.

Magaña and Ortiz are both heading to college in August to further pursue their culinary educations. Magaña wants to major in pastries and develop recipes that satisfy the sweet tooth while staying healthy. Ortiz plans to use the advantages and experiences he learned at Cooking up Change in his culinary future. Amezcua still has another year of high school but plans to head to college the following year to train to become an executive chef.

In addition to Team Orange County receiving the national title, the Chicago team was awarded an Honorable Mention for Outstanding Presentation for their eloquent words in front of the judges’ table. But all the chefs from all eight Cooking up Change teams deserve a hearty congratulations for showing an incredible amount of dedication, commitment to change and, above all, positivity and good sportsmanship. Teams cooperated, helped each other in the kitchen, assisted with plating when other teams fell behind and made some lifelong friendships along the way. And for that, it’s clear that these student chefs were all winners.

“My greatest experience here in Washington, DC was, first of all, seeing all the beautiful monuments that are here, and second, working with all the students who have been working really hard to change the way students eat in the cafeteria,” Amezcua says. “It was a wonderful experience working with all of them.”

Learn more about their journey to becoming national winners.

Congratulations to Orange County and all the participating chefs! Best of luck on your future endeavors!