Notes from New Zealand: Holistic Approaches to Addressing Health Disparities in the Community 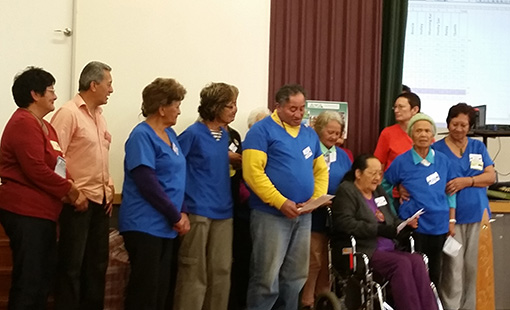 “You’ve got to listen between the lines”

Tara Kennon served as HSC’s communications manager before moving to New Zealand’s Coromandel peninsula, where she is has focused on projects to promote travel in this region. Now, she’s reporting back to us on a few of her observations related to school wellness. Today, we’re sharing the first of two posts she’s written about community-based efforts to address health disparities.

“It’s about getting to know each other,” said Sue King when she told me about her work to address health disparities in the community. “First you talk about who you are, where you’re from, common interests. Maybe I know your aunt or we have a common friend. This way, you form a trust.”

Sue works as a Kaitiaki (a Maori word for guardian, carer or protector) at Thames Hospital in the small town where I live. She’s employed by the District Health Board’s Te Puna Oranga – Maori Health division to support Maori patients and their whanau (extended families) while ensuring staff are equipped with knowledge of relevant cultural practices. Sue is also a leader in her community who makes sure that morning meetings at her marae (the community meeting house) begin with a big bowl of fruit salad instead of a fatty breakfast.

In some ways, I realized, Sue’s words could have been spoken in Chicago, maybe at a Parents United for Healthy Schools meeting. While the cultural context, health care system and history are very different, I’ve learned about two things that are strikingly similar in this small town and Chicago’s urban center: children and families in minority communities face significant health disparities, and on-the-ground leaders are addressing these disparities through an approach that begins with listening carefully.

As Heather Makiri-Wi, explains it: “You’ve got to listen between the lines. You’re building a relationship. You ask how they’re doing, then you just sit there quietly and have a catch-up.” A few blocks from Sue’s office in the hospital, Heather works as a Kaiawhina (helper or guide) for service coordination at Te Korowai Hauora o Hauraki. Her far-reaching role takes her to clients’ homes in rural corners of the Coromandel peninsula and to community meetings in town. It means looking at multiple dimensions not only of an individual’s health, she explained, but of the extended family and community health as well.

“It’s about holistic healing,” she said. “It’s not just about healing one thing when there are five other things that could be going on with that whanau.”

This approach rings especially true with diabetes and childhood asthma, the illnesses that Sue and Heather identified as top concerns for the Maori families they work with. Like the educationally-relevant health disparities HSC addresses, these illnesses are closely connected to the core issues of food, physical activity and the indoor environment.

Maori, New Zealand’s first people, today face striking health disparities with diabetes, asthma and other illnesses. Rates of diabetes are three times higher in Maori communities than among other New Zealanders. The NZ Asthma Foundation explains that while asthma rates for Maori children are about the same as the national average, Maori children with asthma generally suffer more severe symptoms and are twice as likely to be hospitalized as a result. Asthma rates are higher for Maori adults.

In both cases, the remedies that have been effective have as much to do with a holistic approach in the community as they do with medication.

Up next: a close look at the strategies Sue and Heather practice to address diabetes and asthma in the community.

Previous
Community Eligibility Provision a Win for Schools, Families and Students
Next
Notes from New Zealand: Taking on Disparities in Diabetes and Asthma in the Community