What Rollbacks on Nutrition Standards Mean for School Food 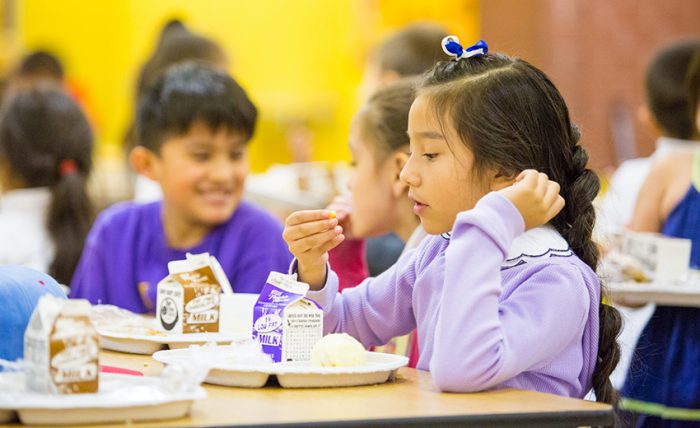 Back in May, U.S. Secretary of Agriculture Sonny Perdue announced the administration’s intentions to roll back some healthy food standards. Now that kids are back in school for another school year, we wanted to clarify what’s changed, what hasn’t changed and what it all means for the health and wellness of our nation’s children.

The proclamation that Secretary Perdue issued in May focused on providing “flexibility” in three areas: sodium, whole grains and milk. The administration has hinted that more changes might be on the horizon.

According to that initial schedule, schools would have had to meet Target 2 for the 2017-2018 school year, but Secretary Perdue’s proclamation means that schools that meet Target 1 will be considered compliant through 2020.

The HHFKA stipulates that all grains served in schools be at least 50 percent whole grain. That includes pasta, biscuits, bread and tortillas. The requirement was phased in over a three year period, and districts were able to apply for exemptions, which have been popular for regional foods traditionally made with white flour.

Secretary Perdue’s proclamation extends the ability for districts to apply for exemptions. The proclamation also directs the USDA to look into providing “additional options in regard to the serving of whole grains.” We are awaiting additional details from USDA on how this change would be implemented.

What does this mean for school meals?

The real concern lies with the delayed sodium targets. Because schools weren’t expected to start meeting the lower target until this school year and weren’t expected to meet the final target until 2022, progress toward those targets might be delayed. Overall, Americans consume too much sodium, and the Centers for Disease Control estimates nine out of 10 American children eat too much sodium. Because children eat so many of their meals at school, reducing sodium in these meals is a key way to reduce sodium intake overall.

But beyond this, the added “flexibility” likely won’t change much in school food. School districts have been working toward meeting these higher standards for years, and 95 percent of them were meeting them, according to the USDA’s own numbers.

We’ve heard from several districts that we work with that they aren’t planning on rolling back the progress they’ve made on school meals. For example, Boston Public Schools was already meeting Target 2 for sodium.

The market, too, has been working to provide products that meet the school food standards. For example, schools might have a hard time finding flavored 1 percent milk because manufacturers stopped making it. Manufacturers have also been hard at work developing pastas and tortillas that meet the whole grain requirement.

Just because Secretary Perdue is giving schools more time to meet some of the standards doesn’t mean that schools will backtrack on the progress they’ve already made to make sure all students are given access to nutritious meals. The challenge now lies in making sure no further rollbacks are made.