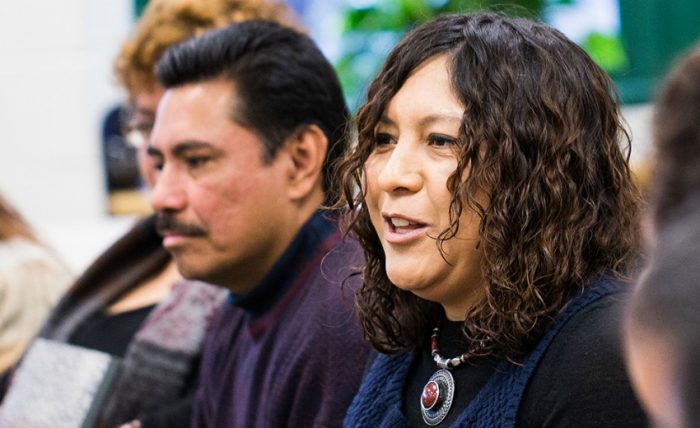 This fall, we’re celebrating 10 years of Parents United for Healthy Schools. For the past decade, Parents United has been a leading force in creating healthy school environments through organized parent leadership. This parent-led movement advocates to create a better future for all Chicago children by working together with schools to create healthy environments that support student learning. In this blog series, we’re revisiting some of the successes and milestones of this movement.

Liliana Hernandez, a parent at Eli Whitney Elementary School in Chicago’s South Lawndale neighborhood, started learning about the link between health and academic success six years ago when she got involved in Parents United for Healthy Schools, a parent-led movement organized by Healthy Schools Campaign.

Eli Whitney serves a student population that’s 98.8 percent Hispanic and 96.5 percent low-income. According to data from the city of Chicago, 52.3 percent of Chicago Public Schools (CPS) students in the neighborhood were overweight or obese during the 2010-2011 school year, the most recent year data is available.

Every day, Liliana experienced the real-life repercussions of these statistics. Yet she had only a vague notion that her children’s school could play more of a key role in supporting wellness. That was until she got involved in her local school wellness team as part of the Parents United program.

In 2006, a federal law required schools to adopt a wellness policy. In its wellness policy, CPS stipulated the formation of local school wellness teams, but schools often did not know how to get them started. Parents United stepped in and leveraged the policy to help parents establish parent-led wellness teams.

A school wellness team reflects the board’s commitment to removing health-related barriers to learning and is designed to provide students with a school environment that promotes wellness. With as few as three and as many as 20 members, the teams plan and implement school initiatives that promote a healthy school culture and learning environment.

When she started, Liliana engaged other parents through one-on-one meetings, where she shared her experiences and learned about others’ experiences. She also learned about the district’s policies and what her school was doing well and what some key areas of improvement were. For the past several years, Liliana has lead the wellness team and successfully advocated for breakfast in the classroom, healthier school menus and helped collect more than 1,000 signatures in support of the district’s new PE policy during a campaign where Parents United collected and submitted more than 7,000 signatures. Liliana also started an exercise club for other parents at her school, and has used the knowledge she’s gained through Parents United training programs to improve the health of her family and friends through regular exercise and healthy cooking at home. Eli Whitney was one of the pioneer schools to achieve the healthy school certification and was honored by the First Lady in Washington, D.C.

To date, Parents United has worked with more than 3,000 parents. Sixty parent leaders from 45 different CPS schools attended our most recent Parent Leadership Institute. Over the past 10 years, hundreds of parents have led wellness teams.

Since the first rally in 2006, Parents United has advocated for the return of recess, championed Breakfast in the Classroom, collected signatures in support of daily physical education and pioneered the parent-led school wellness team model. We’ll revisit many of these accomplishments in future blogs in this series.