Parents United at 10: The Founding Moment 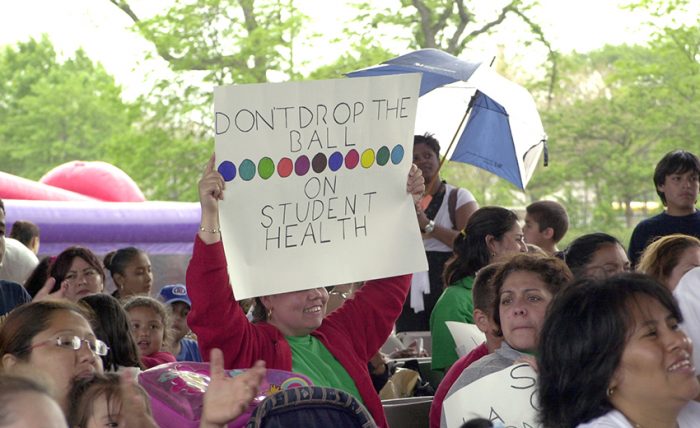 This fall, we’re celebrating 10 years of Parents United for Healthy Schools. For the past decade, Parents United has been a leading force in creating healthy school environments through organized parent leadership. This parent-led movement advocates for a better future for all Chicago children by working together with schools to create healthy environments that support student learning. In this blog series, we’re revisiting some of the successes and milestones of this movement.

In 2006, Chicago Public Schools (CPS) was in the early stages of creating a wellness policy, which was mandated by federal law for the first time. School districts that participate in the federal school meal program are required by law to have a wellness policy that guides the district’s efforts to promote healthy eating and physical activity.

For the first policy, CPS wasn’t going to seek feedback and recommendations from a key group that cares deeply about students’ health: parents. We believed not engaging parents and assuming they would not care about supporting the health of their children in schools was a missed opportunity. To demonstrate that, we organized a parent’s rally for healthy schools in summer 2006. Parents were especially worried about the growing obesity rate; in 2006, 65 percent of children in West Town and 58 percent of children in Little Village were overweight or obese.

Bertha Morin was one of the parents who was concerned about not only her children, but all of the children in her West Town neighborhood. Morin got involved with the rally early on and recruited parents from the neighborhood and around Chicago to participate. It even became a family affair: Her daughter drew fruits and vegetables on posters to provide the rally with a visual element.

Morin was also a speaker at the rally, and she talked about her personal experiences and the link between health and education. “A child that is well fed and healthy is a better learner,” Morin remembers saying during her testimony that day. Many parents were uninformed, she says, and thought that because food was served in schools, it was healthy. That was not the case. Pizza and chocolate milk and vending machines were mainstays in Chicago school cafeterias.

The rally was also an important time to talk about the significant part parents play as role models for their children. Morin remembers making changes in her diet and lifestyle after becoming involved with Healthy Schools Campaign and encouraged other parents to do the same.

We were expecting 200 parents to attend. But more than 700 parents turned out to share their experiences and shape the district’s wellness policy. At that point, we knew we had really struck a nerve. We were there surrounded by parents who showed up to raise their voice for wellness in schools. The rally also attracted public officials such as Rep. Mary E. Flowers and Rep. Cynthia Soto. We knew that day this would be bigger than we’d originally anticipated.

That rally was the founding moment of Parents United.

Since that first rally, Parents United has advocated for the return of recess, championed Breakfast in the Classroom, collected signatures in support of daily physical education and pioneered the parent-led school wellness team model. We’ll revisit many of these accomplishments in future blogs in this series.