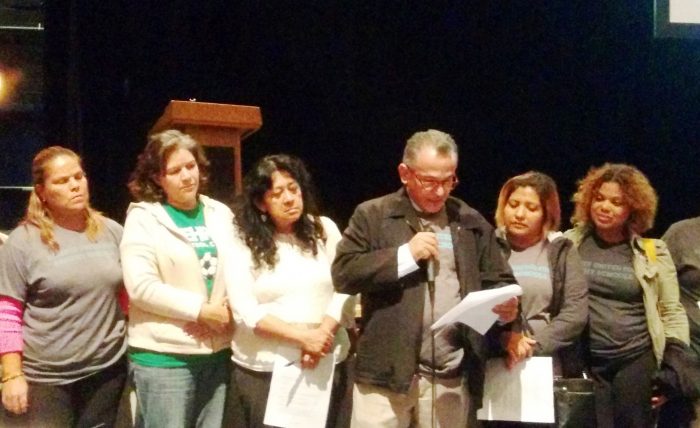 There is a myth that low-income parents don’t have the time or opportunity to make an impact on their children’s schools, but a group of parent leaders gathered in late September to testify in front of the Illinois State Board of Education (ISBE) and prove that is in fact not true.

ISBE embarked on a statewide listening tour to gather public input from school stakeholders in Illinois on how to best implement the Every Student Succeeds Act (ESSA) in Illinois. ESSA explicitly recognizes the importance of physical and mental health and wellness and emphasizes the importance of educational equity for children. The parent leaders of Parents United for Healthy Schools, a parent-led movement organized by Healthy Schools Campaign, used this as an opportunity to weigh in and make sure their voices are heard as the state considers how to reshape its education policies and programs.

More than 75 people came out to the ISBE listening session on the afternoon of Sept. 27, 2016 at Simeon Career Academy, including 12 parent leaders representing 10 area schools from Brighton Park, Little Village, McKinley Park, Marquette Park and other neighborhoods. Jose Hernandez represented this group of parents, and he was the first to address ISBE.

He spoke about the importance of the whole child, and the significant impact of parent involvement. He also discussed the need for parents to be part of the school improvement plan process because working with the schools on these plans is a key way parents can impact their child’s education. Parents need to build capacity, and the knowledge and skills to continue to become even more engaged in their children’s schools, said Jose. He also went on to state that health and wellness should be integrated into every part of the school experience and that the reason health and wellness in schools is such an important issue for parents is simple: healthier children are better able to learn, grow and thrive.

Another issue that Jose brought up was a focus on health and wellness as a means of decreasing chronic absenteeism, which has been proven to be a crisis in the education sector, especially for low-income students of color. The testimonial was well received, and the parent leaders were the only group to talk about health and wellness in connection to ESSA and academic success.

Previous
How to Include Health and Wellness in School Improvement Plans
Next
Celebrate Global Handwashing Day By Kicking Antibacterial Soap to the Curb!