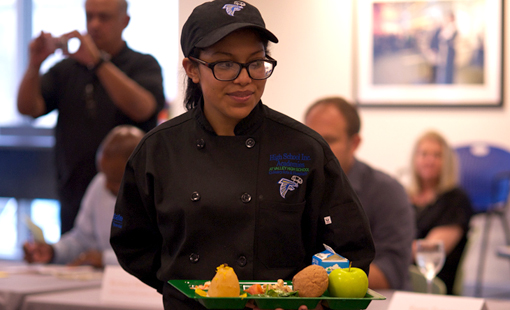 We’re just a weekend away from the big day! The Cooking up Change national finals are right around the corner, and we’re hungry just thinking about it. We’ll have plenty of new yummy dishes to share with you all after the big day, but we wanted to share a recipe with you from last year’s winning team from Valley High School in Santa Ana, California.

Team members Alex, Ashley and Ivan made this delicious dessert of cinnamon poached pears that not only won the competition, but was served at the legislative briefing the next day. It was a huge hit, and maybe it will be a hit with your friends and family too. It couldn’t be easier and makes a great accompanying sweet fruit side to any lunch.

1. Zest both oranges. Segment one orange, juice the other. Save peels. Set aside.

3. Bring water, orange peel, leftover orange pieces and 2 tsp of cinnamon to a boil. Add pears and boil for 10 minutes.

5. Remove pears from boiling water and allow to cool. Cut in half and remove core. Serve with orange segments and drizzle with yogurt sauce.