Reimagining a Favorite Dish for Cooking up Change Houston 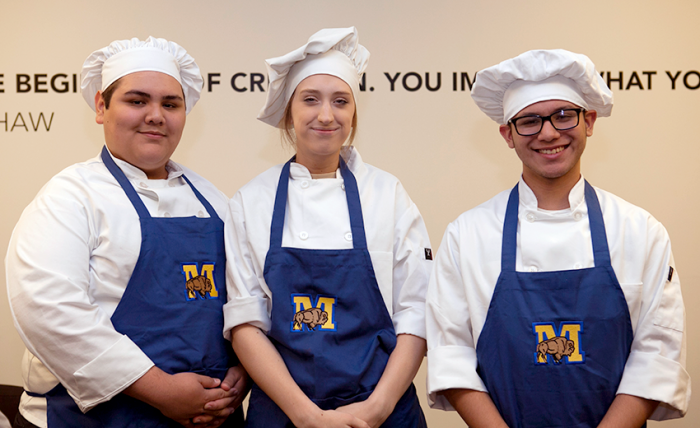 At Milby High School in Houston, culinary students run a restaurant where students serve to faculty, staff, fellow students and the public. One of the first menu items at the restaurant was a pasta dish with zucchini. “We really wanted to recreate that,” says student chef Roberto. He did just that, with his teammates Jordyn and Estevan, to win the Cooking up Change Houston competition on April 21, hosted by Houston Independent School District.

The team ran into a few obstacles while adjusting the original pasta recipe to work for Cooking up Change. Due to cost restrictions, the team had to cut down the amount of oil used to sauté the onions and garlic. “At first I thought that everything was going to stick and nothing would actually cook,” Jordyn says. “So I played around with it and cut back the garlic and onions as well so it would sort of balance out.”

The teams’ perseverance paid off. “When we were announced winners I felt ecstatic to the point where I cried tears of joy! We’ve worked so hard from the beginning, and to win this competition in our first year of competing is just amazing,” says Roberto.

All three team members started cooking from a young age with their family members. Jordyn’s mom let her experiment in the kitchen as soon as she thought Jordyn was old enough not to start the kitchen on fire. Esteven got started in the kitchen with his grandmother and was encouraged by his parents. Roberto helped his mother prepare meals from a young age. “My mother is the person who introduced me to cooking, and I owe everything to her,” he says.

The team from Houston will join other teams from across the country at the Cooking up Change national finals in Washington, D.C., in June. Healthy Schools Campaign’s Cooking up Change contest challenges high school culinary students to create healthy, great-tasting meals that meet the real-life requirements of the national school meal program. Cooking up Change serves up life-changing opportunities, helps students realize their own potential and puts student voices front and center in the national dialogue about school food.