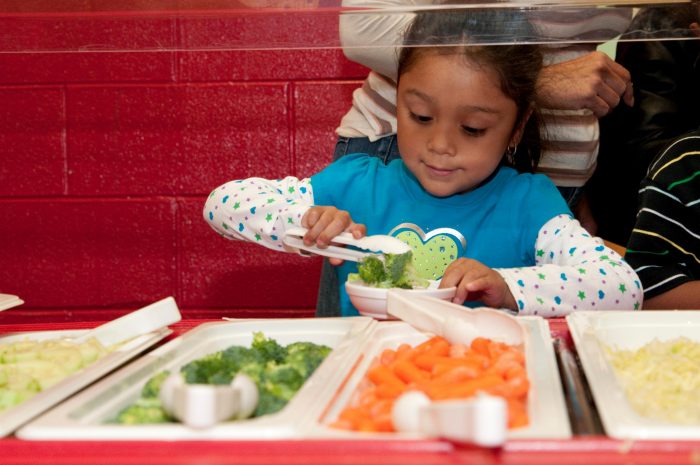 The conversation around school food is heating up, and today a few big-name organizations threw their support behind staying true to school nutrition standards.

In a call today with national media, Secretary of Agriculture Tom Vilsack joined Dr. Robert M. Wah of the American Medical Association, Dr. Benard Dreyer of the American Academy of Pediatrics, and Dr. Eduardo Sanchez, chief medical officer for prevention at the American Heart Association, to talk about how healthier school meals are a key solution to combating the nation’s obesity crisis and helping U.S. children learn and develop into healthy adults.

The issue brought up by several opponents of the nutrition standards is their perceived lack of flexibility, which Vilsack said is not true. “The concern that we have is not about flexibility, it’s about taking a step back from the standards,” he said. “The waivers folks want would essentially be taking a big step back.”

We’re glad to see our partner organizations coming together to voice their support for school nutrition standards and joining the chorus of voices who think school food is important. This is especially meaningful as the discussion around reauthorization of the next Child Nutrition Act ramps up.

The school food news is coming at a steady pace these days and, as usual, the news is a mix of good and bad. Here’s a bit more of the latest:

USDA Announces $30 Million to Support School Food
Cooking healthy food for hundreds of hungry kids for only about a dollar per meal is hard work to say the least. Now try doing it without a good set of knives or with broken down kitchen equipment. Thankfully, the USDA just announced $25 million for kitchen equipment upgrades and an additional $5.5 million for professional development for staff. We know that most school kitchens need large and small investments to support healthy food prep. This may be a finger in the dam, but every finger helps.

National Rollout for School Nutrition Training and Mentoring
Amidst all the calls to rollback school nutrition standards, the need to provide professional development and training for school food professionals has been largely lost. We’re pleased to see that the USDA will expand a school nutrition training and mentoring pilot launched this year into a nationwide program called Team Up for School Nutrition. Clearly, schools can use all the support they can get, and training and mentoring is a major opportunity to support healthy school food.

Here’s more information about Team Up and you can check out past webinars.

Another Misguided Attempt to Weaken School Nutrition Standards
With Child Nutrition Reauthorization on the horizon, attempts to weaken nutrition standards are rolling in. Last week Senator John Hoeven introduced a bill to permanently rollback the whole grain requirements, calling for greater “flexibility.” Well, “flexibility” is not free. It comes at the expense of children’s health. As we mentioned last week:

A recent Union of Concerned Scientists (UCS) report estimates that obesity costs the U.S. $210 billion each year, or 16.6 percent of our total health care costs. The study goes on to state that “Schools are a critical place to introduce and reinforce healthy behaviors that serve as a strong foundation for childhood development and increase children’s chances of living healthier lives,” which can have the very real impact of preventing higher healthcare costs in adulthood.

In other words, this type of “flexibility” is something we simply can’t afford.