Sweet, Healthy Rewards: How One School Created a ‘Smoothie Social’ That Kids Love 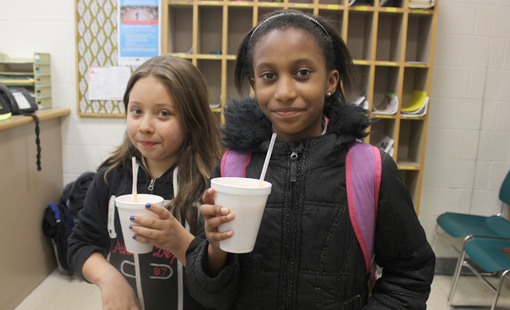 The smoothie social is part of Greene’s Student of the Month initiative, a way of encouraging students to exemplify school values that are important beyond the classroom.

On Friday afternoons around 2:40 p.m., the place to be is the cafeteria. With a couple of blenders, some fresh fruit, a speaker and an iPod, on the last Friday of every month, the lunchroom at Nathanael Greene Elementary School becomes a celebration. Students from each homeroom in the K-5 school who have been designated “Student of the Month” by their teachers gather, along with their parents, for a social involving delicious, fresh fruit smoothies. For the kids, it’s a day of excitement, enthusiasm that radiates throughout the year. For adults, it’s the same thing. When HSC recently had a chance to join a smoothie social, a couple of parents were even spotted sneaking an extra smoothie, smiling as wide as the kids, with a cup in each hand.

And perhaps the parents should be treating themselves a little bit, as Greene Principal Michael Heidkamp credits them with transforming what used to be a monthly ice cream social into a more healthful reward and reinforcement of school culture. For Heidkamp, Greene staff and the parent volunteers, incorporating wellness into the culture of the school is a regular practice, and parent contributions are welcomed. “The nice thing about parents is that sometimes [staff can] get so caught up in the routines and things we do, we don’t necessarily see them with fresh eyes,” Heidkamp says. “So we have parents who come in and say, ‘Here, this is a quick win, a smoothie social instead of an ice cream social.’”

The smoothie social is part of Greene’s Student of the Month initiative, a way of encouraging students to exemplify school values that are important beyond the classroom. For example, April’s value of the month was “Courage”. Teachers from every homeroom write a letter about a student they feel has demonstrated this value. “They might say something like, ‘I have seen this student, when other people have tried to get them off task, or tried to get the student to do something they knew wasn’t the right thing to do, hold their own and either speak out to the group or make sure that they themselves were being who they were,’” Heidkamp explains.

At the end of the month, teachers read the personalized letter to the whole class, keeping the recognized student’s identity a secret and using gender-neutral language to keep kids from focusing on guessing and ignoring the substance. The goal is to make it personal for the student, but also be universal enough that it becomes not just about celebrating that one student, but about fostering a culture where all students aspire to those values.

Parent involvement is important at Greene, and parents of honored students get a letter home and are invited to join their children at the healthy celebration. Heidkamp says parents are responsible for the values students bring to school and should be incorporated into school culture, especially around wellness. “So often, school’s about ‘Oh, leave that at home’ or ‘We’ll teach you what you need to know and the knowledge is in the hands and minds of the teachers,’” Heidkamp says. “This is a nice moment to really recognize what students bring from the home, and the values they get from their parents are an incredible asset.”

As the social wound down, when a group of students were asked which they liked better, the smoothie social or the ice cream social, they resoundingly declared the smoothie social to be better. One student said she liked it better “because it’s a little healthier.” And another, enjoying his mango-banana smoothie, gave the day’s events a one-word review: “Epic.”

Previous
Recipe Friday: Fit & Fired Up with Grilling Ideas for Memorial Day Weekend
Next
Could Your Hand Soap Do More Harm Than Good?