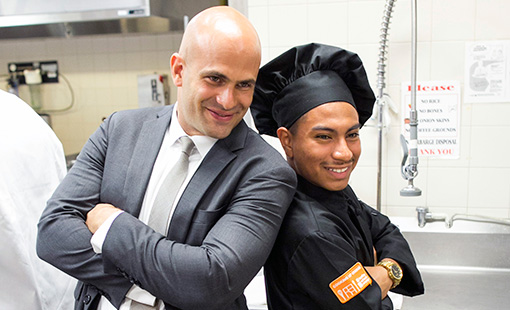 Thank you Sam Kass for supporting Cooking up Change and championing student health.

When Healthy Schools Campaign started Cooking up Change in 2007 — a contest that challenges high school culinary students to create healthy school meals that their peers enjoy — we had no idea the program would take us all the way to the White House. But it did, literally. And for that we can thank Sam Kass, the longtime Obama family chef, White House senior advisor on nutrition, and executive director of the Let’s Move! Campaign, who recently announced the departure from his post at the end of the month.

Through his various roles, Kass has been an ardent supporter of Cooking up Change, going out of his way to personally encourage and congratulate student chefs from across the country for their work to transform school food. In 2009, Kass worked side-by-side with a team of student chefs from Chicago’s Richards High School to prepare their vision of the ideal school meal, which was then served to members of Congress and thousands of students across the country.

This past June, Kass joined students at the 2014 Cooking up Change national finals in Washington, D.C. At a time when the heated political debate over the national nutrition standards had reached a full boil, he stood with Secretary of Education Arne Duncan and Cooking up Change students to throw the weight of the White House behind the nutrition standards in the name of student health (not to mention the science behind the healthier standards).

We can’t thank Sam Kass enough for his great commitment and leadership in advancing student health and wellness issues at the national level. His legacy will be one that students and families will benefit from for years to come.