The Future of Green Cleaning for Higher Education at Temple University 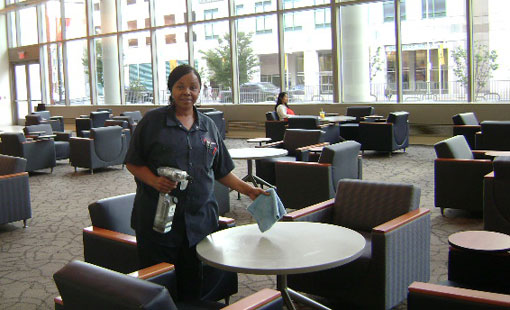 The Health Sciences Center team at Temple University in Philadelphia has gone above and beyond with their green cleaning program. And they are being celebrated for their efforts! Their staff received the 2012 Higher Education Grand Award from American School and University’s Green Cleaning Awards.

Over the past several years, we have seen some major advancements in the world of green cleaning for schools. In our series about top school green cleaning programs around the country, we’ve shown you some of the top custodial teams working in K-12 schools. But bringing green cleaning to higher education is a much different story: having more students and more buildings, creating a health-focused, sustainable environment brings unique challenges. Thanks to empowering training and cutting-edge technology, many universities are adopting model green cleaning practices schools everywhere can learn from.

The Health Sciences Center team at Temple University in Philadelphia has gone above and beyond with their green cleaning program. And they are being celebrated for their efforts: their staff received the 2012 Higher Education Grand Award from American School and University’s Green Cleaning Awards.

Allen Rudd, Director of Custodial Services at Temple University, contracted through ARAMARK, says he was excited and motivated to hear the news. “It was a good way to cap off our efforts and let people see the fruits of their labor turn into something really positive,” he says.

Like many other green cleaning award winners, Rudd says training and encouraging staff to get on board with the new products and procedures is essential to the success of any environmentally responsible cleaning program. He was met with some resistance at first, but made sure to point out how the changes would benefit his team.

“One of the first things I said to them was, ‘Imagine not having to drag a mop and bucket around,’” he says. “Some staff members complain about the weight of the buckets and changing the water, not to mention the mop cloth that often gets soiled. They don’t trust that the mops and buckets clean well. That got their attention.”

Rudd was able to get his team to buy into the changes by introducing them in increments, one building at a time. Training was essential to success, and Rudd refers to the methods as “I Show You, You Show Me” and “I Tell You, You Tell Me.” The idea is that an employee should be able to mirror back the person who is training them on a new equipment or skill in order for it to become second nature. Rudd also employed what he calls “MBWA,” or “Management By Walking Around,” where he would walk around and highlight what employees were doing right as opposed to what they were doing wrong to develop a positive association. As time passed and more staff gradually grew accustomed, it became a more positive venture.

“Sometimes, you have to over-communicate to get people’s attention and get people an example of why these things are going to be beneficial,” Rudd says. “It’s a combination of the students, the faculty and the community as well as the service providers. It’s long-term habits that you’re asking folks to change. We did a lot of collaboration and follow-up just to reward folks for their efforts.”

Rudd says getting people on the campus on board with the program was easier than expected. One of the key advantages to trying out new sustainable products and procedures is that Temple is a research university, so many of the scientists and biochemists on campus were already working in this area and understood what they were doing.

Rudd prefers to use the term “blue cleaning” to describe the changes Temple has made to its cleaning program, saying these changes go “beyond green cleaning” and highlights their incorporation of cutting-edge water-based technology. Through ARAMARK’s Operations Excellence Team, Rudd finds out about new products through their research and testing to determine what to try next. Temple uses Electrically-Activated Water Self-generation Systems (EAWs), including auto-scrubbers and handheld units that electrically charge tap water to create a safe and effective cleaning solution, to clean thousands of square feet in multiple buildings populated by many students in one day. Rudd says this is the most “mind-blowing” addition to the school’s cleaning program.

“When you tell someone we’re cleaning, killing bacteria and using tap water to do it, it’s something that you truly have to prove and they have to see the results,” Rudd explains.

The EAWs have been the focal point of the changes at Temple in cleaning and in floor care. Rudd says people are more likely to report stains on the flooring and carpet now that the EAWs are in place, because not only is the stain removal more effective, but they know the cleaning won’t be a big concern. In addition, Rudd and his team have invested in microfiber mops and have seen a huge difference in floor care.

“Blue cleaning” at Temple has proven healthier, more effective and even more cost-effective: by investing in new technology and phasing out chemicals, the custodial team has reduced supply costs by more than half and reduced cleaning product purchases by nearly half. But more importantly, they’ve improved the health of students and staff, virtually eliminating facilities-related allergic reactions and leading to a decline in symptoms of asthma and other respiratory problems. Rudd says the custodial staff at Temple feel more comfortable with the new system, particularly those who have respiratory issues, who do not want their work interfering with their health.

Rudd is always looking for new products and ways to expand the program. He’s investigating EAWs that use water as a disinfectant, as well as make it easier to maintain floor finishes to cut down the need for stripping. He advises his fellow custodial staff members and facilities directors who want to start green cleaning programs to pay attention to the cleaning industry and connect to organizations such as ISSA to keep abreast of the latest information and resources, as well as engage employees to help them ease into new procedures and encourage acceptance of change. “It’s an ongoing process,” he says. “It’s never-ending. You achieve, you evaluate and you keep your finger on the pulse of what else is available.”

We at HSC congratulate Temple University on the well-deserved recognition of its achievements! Learn more about green cleaning with our Quick & Easy Guide to Green Cleaning in Schools or participate in our informative and completely free webinar series to hear from experts and learn about best green cleaning practices.