Two Words Put School Nurse on the Path to Leadership 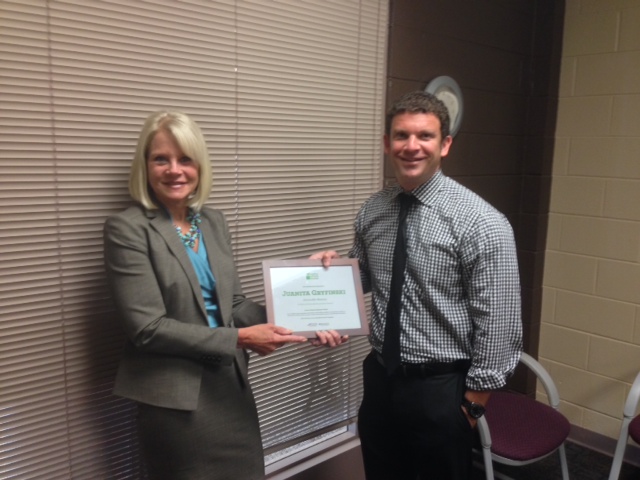 How a spirit of inquisitiveness inspires one school nurse

This spring, HSC was proud to announce the winners of our first-ever School Nurse Leadership Award. Created in partnership with School Health magazine and Maico Diagnostics, it’s an opportunity for Healthy Schools Campaign to recognize the tireless commitment that school nurses make to their students and communities. The five winners and four honorable mentions selected from across the country represent school nurses who are blazing new trails in their field, reimagining the role that school nurses play in school health and wellness, students’ academic success and the health of the larger community. In this blog, we speak with honorable mention recipient Juanita Gryfinski.

Juanita Gryfinski’s school nursing career has been shaped by two little but powerful words: “What if?”

A longtime nurse in acute-care settings, she became interested in school nursing when asked to ride a school bus with a child who needed seizure medication. She accompanied him to school a couple hours a day, and while it seemed like a simple assignment, it introduced her to the world within school walls.

“It really opened my eyes to the different types of students in a school setting,” she said. “It was my first glimpse into all the components that go into keeping kids safe and healthy.”

What if she switched from working in hospitals to working in schools?

She made the change, of course, and more than three decades into her nursing career in St. Charles, Ill., a few things are clear: Leadership, especially for school nurses, is about asking questions. It’s honing a deep inquisitiveness and curiosity about all the things that make students lives healthy. And it’s about not being afraid to try new avenues for student health.

She said: “Every day, you get up and make a decision — “I’m going to make a change.”

She had another big “what if” moment that resulted in a popular addition to the school: therapy dogs. “It started based on a conversation with a parent who was using therapy dogs in the nursing home down the street,” she said. “I thought, ‘Hmm, we have some students with behavioral challenges. What if we bring therapy dogs here?’”

Since then, dogs have helped with all kinds of issues for students with disabilities, encouraging calm behavior and acting as a fun incentive to get moving. Who wouldn’t want to take a walk with a dog during school?

The “what if” questions have extended to policy, too. Juanita has several master’s degrees, including one in school health and public policy. As a school nurse, she recommends staying hyper-connected to new policies around health, because they’ll soon be affecting students. For example, a new Illinois law allowed students to use inhalers without supervision. It’s a good law, Juanita said, “but now who has eyes on them when they’re using their inhaler? Now it’s the PE teacher.” She helped institute programming to teach PE teachers what good inhaler use looks like.

She did the same with parents. What if kids aren’t using their inhalers properly? How will we find out? Families at a back to school night visited the nurse’s office one at a time, and when kids demonstrated their inhaler usage, nurses and parents could discuss. “A parent can see that their kid isn’t shaking the medicine first,” she said.

Juanita has a few other key questions that school nurses should be asking, too. Most importantly, it’s: “Why am I doing what I’m doing, and what can I easily change up now? Who in the community can help me?”

From there, her advice is simple: “Look around, big picture or small picture. Try to do three things well (as opposed to a lot of things) well. There, you'll get the stepping-stone for the next good thing.”

Congratulations to Juanita for being recognized as a national school nurse leader!

Previous
Every Day and in Emergencies, School Nurses Keep Students Safe
Next
A New Frontier for Grissom’s Outdoor Learning and Play