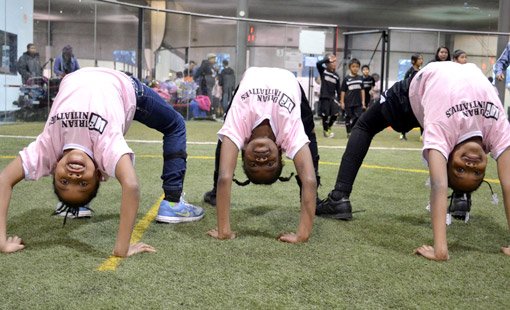 Bright ideas from an HSC partner

When students run, jump and play during the school day, the benefits are clear. Physical activity improves cognition, concentration, classroom behavior and memory — all while lowering students’ risk for conditions such as heart disease and Type 2 diabetes. Because physical activity is so important, HSC and its many partners work hard to make it a bigger part of every child’s school day. One partner we’re proud to collaborate with: Urban Initiatives.

A Chicago nonprofit, Urban Initiatives boosts students’ physical fitness, health education, academic engagement, and character development with programs that include a soccer team, a recess program, a leadership program and more. But its work all shares common roots. Urban Initiatives was started ten years ago by a substitute teacher who tapped into the tremendous power of teamwork and sports, luring students from gang activity and onto a soccer team.

A simple concept with big impact. Today, Urban Initiatives continues to transform lives. Program Manager April Lillstrom recalls one recent elementary school student, Danny. He had always struggled with his weight, and on the soccer field he was fighting to keep up with warm-ups and workouts. But his teammates cheered him on, every day. At the end of the school year, when asked to reflect on the season, he mentioned losing weight as his proudest accomplishment. Lillstrom says that the team’s encouragement made all the difference.

She says: “For the other kids, it was like ‘we’re working together to help him be healthy.’”

Lillstrom notes that teachers often want to increase camaraderie and cooperation amongst their students. But they may overlook the power of physical activity to achieve these goals. She says, “You see kids just standing in line in a hallway, and a teacher is hollering at them to stand there. They’ll say, ‘We can’t go until everyone’s quiet.’”

Instead, Lillstrom says, turn down the commotion by amping up the motion.

How? Here’s a “bright idea” from Urban Initiatives:

For elementary school students who spend many minutes waiting in lines and moving through hallways, find creative ways to make that time more physical.

Instead of waiting or walking in a straight line, teachers can coach students to:

Teachers could challenge students to alter their walks when they go up and down stairs, when they pass a certain classroom, etc. The possibilities are endless!

Lillstrom says that this easy idea “gets kids bought in to moving together… it just takes a little creativity.”

HSC has been proud to collaborate with Urban Initiatives on several key areas. In the past few years, Urban Initiatives was invaluable in helping schools meet the HealthierUS School Challenge. Most recently, it signed on to HSC’s letter of support advocating for daily physical education classes in Chicago Public Schools (CPS).

Thanks, Urban Initiatives, for sharing this bright idea with us!