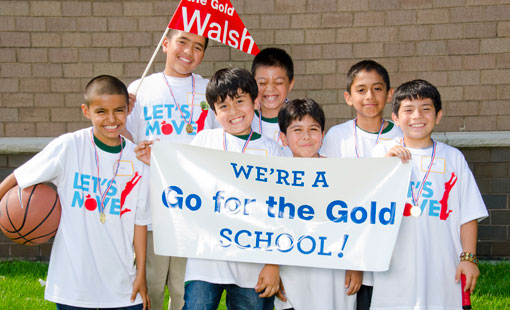 Walsh Elementary School provides a teacher’s perspective on Go for the Gold!

John Neal has been a champion for health and wellness at Walsh Elementary School in Pilsen for years, working with students, community partners, parents, principal Krish Mohip and other community stakeholders—making wellness a part of the school culture.

Many of these changes were already coming into place when Neal, as the Wellness Champion for Walsh Elementary, decided, with the help of HSC and other partners, to apply for HealthierUS School Challenge certification through Go for the Gold. The school was awarded Gold certification in 2012.

“[For] almost all of the criteria, we realized, ‘hey, we’re already doing this,’” says Neal, a physical education teacher at Walsh. “It was a pretty simple process, and it helped us become more mindful about what we were doing and needed to do to promote wellness at the school.”

Over the past several years, the school has made some big changes. It has increased the number of weekly minutes of physical education, and the school cafeteria now has a salad bar, so students can have a “hands-on” option for healthy eating. The same year that Walsh applied for the HealthierUS School Challenge, the school received a USDA grant to buy fruits and vegetables for the year to distribute healthy snacks throughout the school day, a move Walsh says went hand-in-hand with the process.

Neal says getting Walsh HealthierUS-certified has truly been a community effort. Principal Krish Mohip was very involved and supportive of the process, and he credits HSC with providing the resources to get the school started on the process. “It’s kind of like the ‘Six Degrees of Kevin Bacon’ game,” Neal says of HSC. “They’re the link you can trace everything back to.” He credits Healthy Schools Campaign with guiding the school to more resources and prompting further progress on things like getting parents involved and encouraging teachers to manage their classrooms with health in mind.

Other community partners played a critical role, including CLOCC, which provided many insights and resources; Urban Initiatives, which run the school’s soccer program and empowers participation in physical activity; and the Pilsen Junior Tennis Camp. It’s all made an impact. For example: In 2010, near the beginning of Go for the Gold, two students from Walsh began playing tennis with no previous instruction. By that summer, they were getting ready to play in Junior United States Tennis Association Tournaments.

Students have been encouraging other students to participate in health and wellness activities as well, Neal says. He cites the example of Alex, a student who began his commitment to healthier habits in the fourth grade. Even if it was just walking around the track for a few laps, Alex would do it, and he would try any challenge Neal gave him. His parents, Neal says, were also very encouraging. Alex’s health improved and interest in activities grew, and he even went to Washington, D.C. to give a speech to Michelle Obama as part of Let’s Move!

Now, Alex encourages his peers to participate and try new things. Neal describes how, just this week, a parent texted him a photo of her son participating in a rowing program for the summer. That student is a good friend of Alex.

“When you have a kid who has success, it spreads,” Neal says. “One kid is doing it, then three kids are doing it.”

Like many schools, Walsh will experience staff turnover, with teachers retiring and new staff coming in. And Neal says when that happens, the kids themselves will join in sharing the school’s approach to health and wellness with their new teachers.

Congratulations to John Neal, Walsh Elementary and all the other teachers and schools who have been certified through the HealthierUS School Challenge! Thanks for helping make Go for the Gold such an amazing success!

Previous
Enjoy Your Fourth of July Celebration While Staying Healthy!
Next
Parent Leader Karina Macedo Shares Her Perspective on Go for the Gold