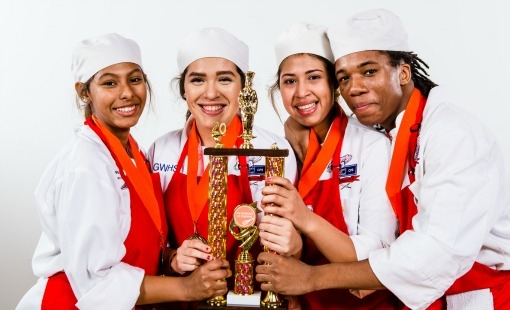 But these dishes weren’t created by professional chefs, they were created by students in the Chicago Public Schools (CPS) culinary program. These talented students chefs designed their dazzling menus while working within the constraints of the district’s school meal program, presenting their meals as entries in the Cooking up Change healthy cooking contest.

At the end of the night, Washington High School’s Cajun Chicken Lettuce Wrap, Roasted Corn Relish, and Peach and Yogurt Pizza came out on top. “Cooking up Change has been a great experience,” said student chef Marshawn Gibson. “I never knew how much fun cooking could be. Everyone was working hard and working together to make it here.”

Cooking up Change puts student voices front and center in the conversation about school food, challenging them to create healthy school lunches that their peers will enjoy, while adhering to strict nutrition guidelines, ingredient lists and budget constraints. “It took a lot of thinking and a lot of going over, because we couldn’t use salt or add sugar,” said Marshawn. “We had to go back to our basic culinary training. We had to figure out where you can get natural sugars and salt to get the right flavoring.”

The recipe is a healthier spin on a popular chain. “Two people on our team worked at Chipotle, which is where our original idea for a Cajun chicken bowl came from,” said Marshawn. “We figured we could make it even healthier if we switched out the bowl idea with the lettuce wraps.”

Washington was one of 16 teams competing in yesterday’s competition, and each and every one of the nearly 100 students chefs put out delicious food. Although we can only give out a few awards, we are so proud of all of these student chefs.

Last night’s win for Washington was just the start of what’s going to be a busy several months for the team. Washington’s meal will be incorporated into the CPS menu and served across the entire district. In June, the team will travel to Washington, D.C., to compete in the Cooking up Change national finals against other winning teams from around the country, and to serve their meal to members of Congress at a legislative briefing on Capitol Hill.

Congrats to Washington and all the students chefs who gave it their all last night. You’ll be hearing a lot more about Washington in the coming months, so stay tuned!

Previous
See You Tonight at Cooking up Change Chicago!
Next
Making Progress on the Free Care Policy